“Derrick Zieba’s sound design and William Lyons’ composition were delightful, filling the air like a rhapsody of gorgeous butterflies.”

Their forbidden love broke all the rules. Their passion tore their lives apart, ripping through the loose fabric of twelfth century mores. The devotion of Abelard and Heloise continues to inspire the deepest affection in those who have born witness to their story.

Eternal Love (formerly titled In Extremis) is set in medieval Paris in the age of the great Peter Abelard. The French capital is the epicenter of a proto-renaissance. New modes of thinking are challenging the old order. Ecclesiastical certainties are coming under the scrutiny of innovative thinkers like Abelard.

Having quarreled with his old fashioned teacher, William of Champeaux, Abelard establishes a philosophical academy of his own. It’s a runaway success, elevating the trendy young scholar into the most fashionable circles. Every inquiring mind wants to be shaped by him, and few are more engaged than the beautiful Heloise.

When her uncle hires Abelard to provide private tuition, Heloise is brought into the intellectual and sexual orbit of a man with many powerful enemies.

Howard Brenton’s script is a vehicle not only for one of Europe’s most cherished love stories, but also for deeper musings about the interplay of intellectual and physical love. It is a sly and wily creature, coiling around familiar events, unafraid to flex its comic muscles.

However, John Dove’s direction recalls the sad tale of the actor, made famous by a long-running TV improv show, who found himself unable to work without exaggeration. Perhaps this production would have worked in the frenetic intimacy of London’s Globe Theatre in which it was born, but something was badly lost in translation.

The actors were spread across the broader canvas of the Kings like cold butter straight from the fridge. The blocking was as blocky as Duplo and so were several of the performances. A last minute substitution in the cast may not have helped, but at no point was the love, the very birth of romance, in evidence. The violence of Abelard’s fate worse than death was muted, monotonal even.

The set was barely a set. A wishy-washy shadow, a pale imitation of the Globe. Entrances? Check. Musician’s gallery? Check. Some trees? Check. Anything else? Not really. This was a prop-lite production well turned out in medieval clobber but with the feeling of a functional business suite rather than brilliant tailoring.

Euterpe was the only saving grace. Derrick Zieba’s sound design and William Lyons’ composition were delightful, filling the air like a rhapsody of gorgeous butterflies. Together with Rebecca Austen-Brown and Arngeir Hauksson, Lyons found the quick heart of Brenton’s script. Measured, witty, soulful and soul-filled, I just wish the rest of the production could have looked up from the stage and played as well as the gallery. 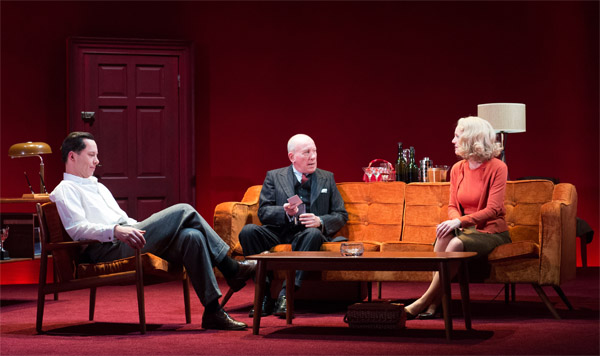 “Everything about the production is carefully crafted to cast you back to a bygone age.”

Here’s a piece of trivia you might not know: before it got the Hitchcock treatment, Dial M For Murder was already a popular West End play.  This elegant revival is keenly aware of that heritage, displaying an impressive attention to detail as it recreates the story’s post-war milieu.  Everything about the production – furniture, costumes, sounds – is carefully crafted to cast you back to a bygone age: a time when phones made funny clicking noises, men sank brandies before hopping in their cars, and everybody wore their waistbands astonishingly high.

The script’s distinctly old-fashioned too, especially in the opening scene, where the characters plonk themselves down on sofas to reminisce about the back-story.  But Mike Britton’s striking set design lends the production some stripped-down modern flair: an iconic bright-red telephone is matched by a looming bright-red curtain, behind which the titular murderer duly hides.  Hanging from a circular rail, the curtain creepily rotates all round the set – a constant reminder of the blood that’s been shed, and of one particular character’s all-too-obvious guilt.

The stage rotates as well – a creative approach to what could have been a very static play, though the overall effect is sometimes more disorientating than it is disturbing.  A few shifts in tone are confusing too: the protracted murder scene feels wilfully overblown, in curious contrast to the generally slow-burning mood.  But there can be no reservations about Mic Pool’s eerie soundscape, whose portentous jazz riffs have the power to make even an empty room utterly enthralling.

Christopher Timothy – well-known for his TV roles – offers a reassuring presence in the form of Inspector Hubbard, melding the homely normality you might find in Midsomer Murders with an unexpected hard-nosed urgency in the later scenes.  The role doesn’t offer him many opportunities to stand out, but it’s a finely-nuanced performance which does much to anchor the rest of the play.  The acting honours, however, truly belong to Daniel Betts, whose villainous Tony Wendice is a masterpiece of smooth malevolence.  Betts’ performance is as sleek and oily as his swept-back, Brylcreemed hair.

If the truth be told, Frederick Knott’s 60-year-old script isn’t quite as masterful as you might have been expecting, and a few of its crucial plot points defy rational analysis.  But as long as you don’t think too hard about it, you’ll find this a comfortingly faithful production – which is slow out of the starting blocks, but accelerates smoothly towards an exciting, brain-teasing conclusion.  It may not be Hitchcock, but it’s a good solid play.  Dial K for King’s and book your ticket now.

“On deck aboard the Jolly Roger, pint-sized John Darling, with obligatory top hat and brolly, upstages the big, very tall, Captain Hook (Grant Stott) with talk of human rights and the Geneva Convention”

The show fits its Christmas billing. The outsize programme features ‘Panto Puzzlers’ – try Michael’s Star Maze for example – and happy seasonal advertising for the young at heart. ‘If you can dream it, you can do it’ is a good enough way to Never Never Land (not Musselburgh) …  via the second star to the right. There is lots of fairy dust and spectacular lighting to fly us out of Edinburgh and to transform the ‘wee green bogey man’ into the fearless, battling, Peter who will not grow up.

On deck aboard the Jolly Roger, pint-sized John Darling, with obligatory top hat and brolly, upstages the big, very tall, Captain Hook (Grant Stott) with talk of human rights and the Geneva Convention. Poor preening, impotent Hook! There is snide mention of his little blue pills – Tiger Lily gets leered at – and his quarter-deck shakes a bit as he clashes swords with the agile Peter. His (over-used) command of ‘Pirates Attack’ brings on a nice dance trio who would not attack a sand-castle. Regardless, Stott preps for his dastardly role by a brief appearance as Mr Darling, twirling his moustache and singing a wicked little ‘It’s a banker’s life for me’. The later mention of Fred Goodwin is happily inevitable.

The really funny routines are firmly with the Smees. Allan Stewart and Andy Gray perform with gleeful, twittish and tickling spirit as sparring couple, squashed couple and as a pair of beached mermaids. One scene, involving mops on parade and the baldy joke, is too long but the two become real pantomime villains when with the lights up they turn a tv.camera on the audience. Grown-ups beware!

“But where”, the cry should go up, “is Peter?” Well, he is not quite as lost as his Lost Boys, but he is nowhere near Wendy either, which makes Maggie Lynne’s part sweet but distant. Daniel Healy flies in well – one leg perfectly bent at the knee – but it is not easy to land lines like ‘To die would be an adventure’ amidst the fire balls and dance numbers, not to mention an interloping 007 and Adele. Peter’s rousing ‘Cock a doodle doo’ greetings cannot stand against the fun to be had with sing-along ‘Rum tum tickle your bum, Everyone one shout hurrah!’ or a barfing, “HiYa”, Tinkerbell.

And give the animals their place in this entertaining show: one large Nana dog, all big eyes and paws; Hook’s smart-alec parrot; and the mother of all crocs. You do want to see that croc!