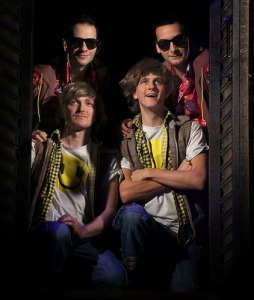 “James Tucker as Adriana pushed out all the stops. He built up a fantastic head of steam, crashing into the terminus barriers with enough force to lift the plot’s ludicrous conclusion to the heights of hilarity.”

The three preceding (and four subsequent) plays of the RSC’s 2001 Histories Cycle had been so brilliant, that the unutterable awfulness of Edward Hall’s take on Henry V came as a serious shock to the system. It’s taken thirteen years of painstaking therapy for the flashbacks and nightmares to subside. Unforgettable was the moment when Hall had hundreds of tennis balls bounce across the stage on Essex’s line, “Tennis balls, my liege.” One of the most dangerous and dramatic moments in the canon blown out of all proportion for the sake of a cheesy visual gag. For those of us embarked on the whirlwind tour of eight history plays in six days the forced funny fell flat.

By contrast, two nights earlier the definitive Richard II of my lifetime had snatched our collected breath away. The late, much lamented Steven Pimlott punctuated the opening play of the Cycle with the lines, “I have been studying how I may compare, This prison where I live unto the world: And for because the world is populous And here is not a creature but myself, I cannot do it.” Shakespeare gave the line to Richard II alone. Pimlott shared it with Queen Anne (Act 3: Scene 4), Richard (Act 5: Scene 5) and at the very end with Bolingbroke. The effect was profound, out barding the Swan.

The recurring lines appealed to my grumpy teenaged sensibilities. More consequentially, it conclusively demonstrated that a director can be reverential to Shakespeare’s unmatched genius without embalming his text. David Troughton played Bolingbroke, opposite Sam West in the title role. Both are scions of great acting families. Edward Hall, director of the Propellor Theatre Company, has an equally impressive pedigree, but as Tony Benn liked to quip, there’s no such thing as an hereditary pilot.

Back in 2001, when mobile phones were still a novelty (just about), the cast of Henry V had been slouching around on stage at the start when a ringtone rang out. It was Pistol’s! How funny was that? What a clever and inventive way to remind people that they might inadvertently interrupt the script with a needless distraction.

Thirteen years later, we enter to find the same busy business on stage and off. Actors flit hither and dither one-sidedly chatting with the audience, establishing The Comedy of Error’s Rocky Horror aesthetic. Perhaps this bonphonie is your cup of tea. All I’d suggest is that in the nature of things, a person standing can’t help but talk down to a person sitting, figuratively and literally.

An all-male cast (as in Shakespeare’s own day) necessitates cross-dressing. Hold the panto, why are we meant to find this intrinsically funny? All-female Lears et al don’t tend to tap this varicose vein of comedy mould. In the week when India recognised transgender people as belonging to a third gender, I can’t help wondering if we aren’t being invited to backhandedly giggle at the black and white minstrels of our age.

Similarly the all-caucasian Mariachi band seemed to suggest something diminishing about Mexican culture not uttered, outside the Top Gear studio, since the producers of Fraiser toyed with the idea of Daphne being a laconic hispanic housemaid back in the early ‘90s. Did this production seep out of the Blue Peter millennial time capsule? Even the prolific use of football shirts nodded towards the Nick Hornby-era, when the beautiful game’s gentrification was at fever pitch. The 21st century appeared above the Madness inspired soundtrack in the form of the e-cigarette which is now all but ubiquitous in productions lacking mature vision.

The Comedy of Errors is a tough nut to crack. Two pairs of mistaken identical twins causing double the hilarious consequences. It’s a silly play requiring serious talent on stage. Fortunately, even the Dead Sea can reflect starlight.

This was an exceptional cast without exception. Joseph Chance and Dan Wheeler, as the twin masters, established the musky basenotes from which the playful rifts of Will Featherstone and Matthew McPherson, as the twin servants, emerged to enliven. Although all four were not on stage together until play’s end, they conjured a continuum which turned the narrative arc into a canopy of luscious woodbine, sweet musk-roses and eglantine which perfectly perfumed the performances of the entire cast.

James Tucker as Adriana pushed out all the stops. He built up a fantastic head of steam, crashing into the terminus barriers with enough force to lift the plot’s ludicrous conclusion to the heights of hilarity. Beneath the dragging drag act both he, as well as the flawless Arthur Wilson (Luciana), established the emotional range required for the darker comedy.

Dominic Gerrard as The Duke, as with the whole production, came into his own after the interval. Suddenly the pace got pacier, with time being left for the actors to enjoy the fruits of their labours. The plot may be thin as tissue during a paper pulp shortage but it frames some fantastic lines, banter and badinage.

To see a strong cast with swift bite slow to sink their teeth in requires the Russian Revolutionary remedy. After 1917 Soviet orchestras divested themselves of importunate conductors, preferring to guide the collective collaboration by the mutual light of their individual talents. The Propeller Theatre Company should propel their Jonah overboard.