“I laughed so much I was reprimanded by the woman in the seat in front for being too loud.”

I’ll admit, I wasn’t a massive fan of Peep Show when it was out (is it still out?), and being of a certain age (in my twenties), I can’t say I’m particularly au fait with the works of P G Wodehouse. Therefore, my expectations in going to see a period potpourri starring Robert Webb weren’t particularly high. But what a comedy it is!

As the curtain rose to a near bare set with Webb postulating alone, it could easily have turned into a rather self-indulgent affair; but the snappy delivery of some great one-liners, commanding physicality and fine character acting from the three actors were all top notch. It is anything but a one-man show.

The script (created by the Goodale Brothers from original Wodehouse works) and the concept are charmingly British and brilliantly written for the stage. The scenes move at a cracking pace and individual moments of lyrical wit are delivered with comic perfection all the way through. While the first half is more about word play and establishing a tone, the second half raises the game – and then some – by introducing elements of farce that are so well pitched as to make them outrageous but not clichéd.

The hilarity is at its peak when the numerous ‘others’, played by Jason Thorpe and Christopher Ryan, start to overlap in the same scenes. One particular highlight is when Ryan, playing two characters at the same time (one male, one female) holds a quick-fire argument with him/herself, without slipping out of either character for a second. Fabulous! I think this was when the lady in the seat in front of me turned around to reprimand me for laughing too loudly. But I was far from alone in my gutsy chortling. 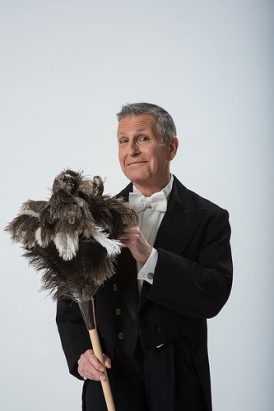 The slickness of the costume changes and clever use of the impressive set made the piece feel very professional and daring (reminiscent of shows such as Noises Off at the Old Vic in 2013). The smashing of the ‘fourth wall’ gives the piece a contemporary blast, without losing anything of its finesse. It was particularly enjoyable being able to watch the cast do their own sound effects at times, with ne’er a thought for boring naturalism.

Any faults? If one were to be really picky, perhaps it was a little shouty at times, and the narrative got itself somewhat confused in all that dash and panache. But that is literally it. The whole show is a corking romp through the best of polite British comedy, superbly acted and with enough laughs to cheer even the grumpiest of young grumps.

Go to Jeeves and Wooster in Perfect Nonsense.