“All mythology is incredibly fascinating. It’s a lens on what makes humanity inherently human.”

If the scheduling for this article runs to plan, it’ll be published first thing on Monday. The name for the first day of the working week is derived from Moon Day in old English. If the scheduling doesn’t work out, the savage reader may have had to wait until Tuesday or Wednesday – days named for the deities Týr and Woden respectively.

The continuing influence of Norse mythology is all around us, but what is it, or rather where is it? The stories (allegorical and categorical) which make up the Abrahamic faiths are contained in their respective volumes of the Sacred Law. The inexact equivalent in Norse, or more specifically Icelandic, mythology are the Prose and Poetic Eddas. These legendary manuscripts are akin to the Viking bible. Written roughly 1000 years ago, they immortalize the culture and society of the Northmen.

Andrew Valkauskas has been studying Viking history and mythology for over 20 years. In 1993 Andrew published the first edition of Fate of the Norns – a line of viking fantasy role-playing games, the mechanics of which are deeply rooted in Viking mythology.

The Eddas have been constant his muse and inspiration. Now Andrew’s honouring them with a “pull-out-all-the-stops” new edition to sit alongside the print editions of (and supplements to) the Fate of the Norns series. The narrative will tell tales of the gods, the giants and many other wondrous beings who inhabit the world tree Yggdrasil – from the creation myths all the way to Ragnarok, the twilight of the gods.

You can track Andrew’s progress at https://www.kickstarter.com/projects/avalkauskas/the-illuminated-edda.

How would the original readership have encountered the material spun through the Eddas?

Well when these myths were fresh (c. 300-900 AD), they were passed down via oral tradition. Lineage was very important to the northmen, as the leaders of the major dynastic families claimed to have gods are the progenitors of their lineage. As a result, those in power wished to keep this lore alive and prevalent. The relationships between humans and gods were immortalized via songs and poems.

The poetic meter and structure is different between the Poetic Edda, and the poetry described in Snorri’s Prose Edda. The Poetic Edda uses simple structure, more akin to what a song would use. The Prose Edda has a much more elaborate style that uses kennings – using a figurative phrase instead of a simple word. It’s clear that both the oral and written traditions were shaped by the current social trends.

Although the tales were written down as the Eddas in 13th Century Iceland, they are much older. Just how far have their roots been traced back? 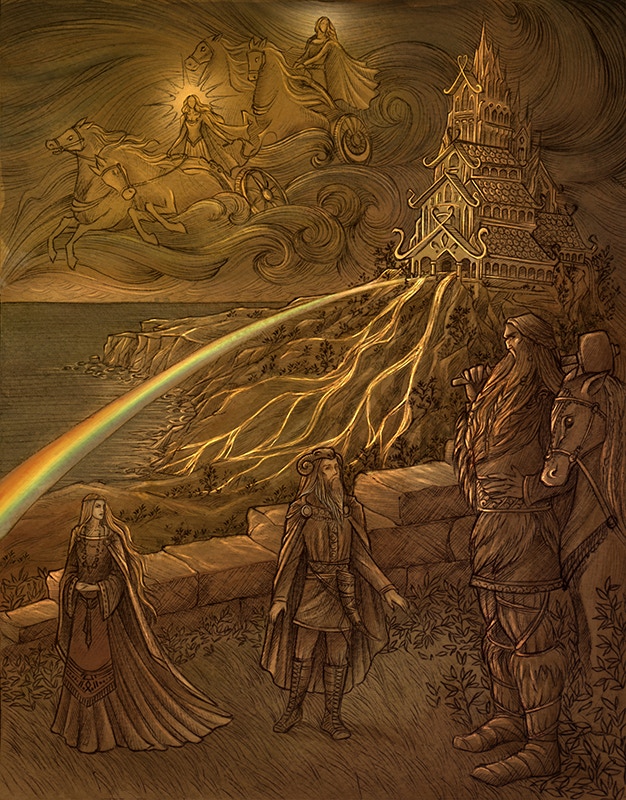 The oldest written versions come from the Codex Regius, a batch of manuscripts dated c. 13th century. More were discovered in subsequent centuries, and those have helped build up the body of work with unique works like the Rigsthula. It’s hard to say when an oral tradition may have started, one of the yardsticks that can be used is to trace back one of the dynastic families to their progenitor. The Yngling dynasty claims to have come from the god Frey. You have a vague succession of heirs which could be counted and then an estimate can be made. I have that number written down somewhere, but right now I cannot recall.

Were the stories intended as simple entertainments, or do they carry deeper lessons about what it is to be human?

Most mythologies are a reflection of human understanding, and our approach to viewing and managing the world around us. Through the use of allegory, these stories are meant to impart wisdom. One of the more in-your-face poems is the Havamal – which are the teachings of Odin. It covers social behaviour, friendship, folly and common sense.

What got you so interested in what a bunch of dead Vikings had to say?

I think all mythology is incredibly fascinating. It’s a lens on what makes humanity inherently human. For me, right after Viking myths come the Mesoamerican myths. But Viking myths are very special, because on top of the Eddas, you get a bunch of companion sagas written by Icelanders and Norwegians which are incredibly entertaining.

And these dead Vikings were quite an amazing peoples… sailing past the far reaches of any map… raiding and trading… creating amazing poetry… they were master negotiators and eventually settlers who birthed the next age. Unfortunately, contemporary media likes to simplify their accomplishments and pigeonhole them as barbarians with horned helmets.

Is the text already written?

Some of it is written, and I’m splitting my time between The Illimiated Edda and the next book called Lords of the Ash. They are meant to be companion books.

The project artwork looks sensational, will the text be equally grand? How can the competing needs of scholarly insight and dramatic tension be balanced?

That’s the million dollar question and the hardest part of the entire project. Going back 6 months when this project was in its concept stage, I cycled through the merits of several different approaches. One of the high impact decisions was to omit any Ragnarok game rules, mechanics and content from The Illuminated Edda. That decision allowed me to keep The Illuminated Edda a pure and authentic narrative piece, with all game content relating to the gods relegated to Lords of the Ash. 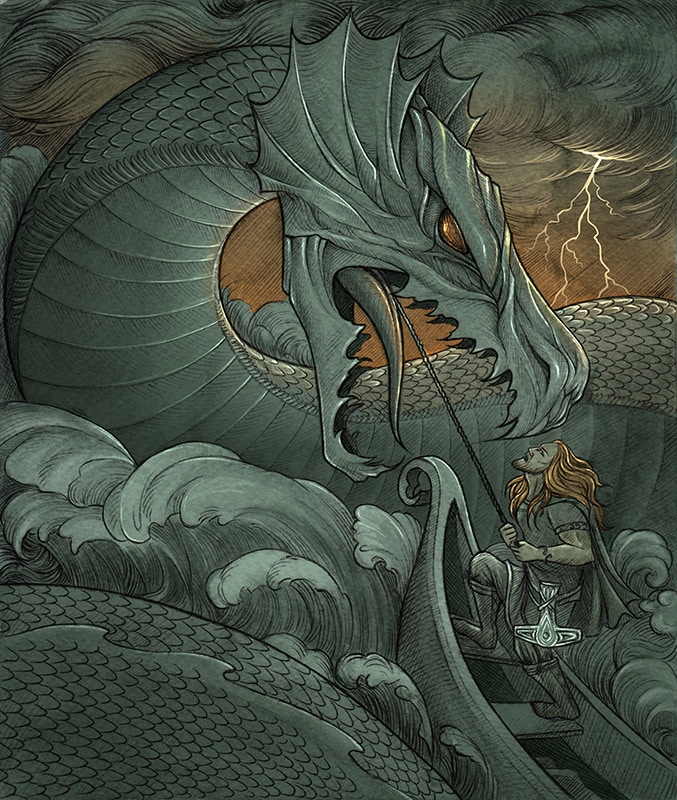 Another key impact decision was that the text would not take on a stuffy academic writing style, but rather I would opt for something more entertaining and accessible to a wider audience. The writing style I am trying to mimic is the prose created by Snorri Stuluson. It has a more modern flow, but I think it captures the essence of antiquity.

The last major decision was how to add evolved content. As many know, the Eddas contain ambiguities, contradictions, omissions and some really intriguing moments, places and events are glossed over leaving the reader longing for more. For 20 years I have been thinking about how the unspoken elements turn out; what the motivations may be behind the various actions of the gods and jotuns.

All of these thoughts needed to hit parchment, and after a long wait, 2015 is the year. I didn’t want to mix my sagas in with the original Edda content because I’d like this Illuminated Edda to be my go to Edda when I want to look up something authentic and specific. So the last major decision was to segregate the original content and the new content by compartmentalizing the respective narrative into chapters. This way readers who wish to get historical accuracy can read only the original content, and for those interested in a complete tapestry of viking myths can go through all of the chapters in order.

You’re already $11K passed your original Kickstarter target, and there are still a few days to go. How do you account for your success funding The Illuminated Edda project?

The Fate of the Norns brand and I are very fortunate to have many loyal and voracious fans. We’ve also worked very hard with our project teams to create books that we can be incredibly proud of. Every project is an attempt at making something better than the last one. Our artists, editors and layout designers are not only extremely talented, but are also very enthusiastic about the project and final outcome. 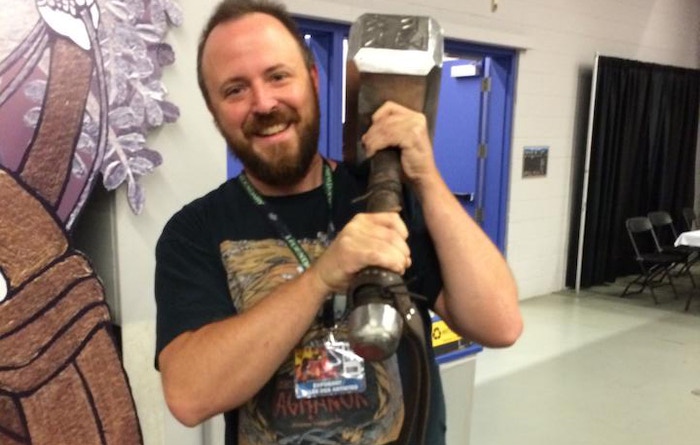 One of the project rewards offers one generous backer a hand-made Mjolnir (Thor’s hammer). How did you get your hands on that, and is there a thunder god who wants it back?

A good friend of mine made it and it follows us on our convention circuit. It’s the second one ever made, the first sold at a show rather unexpectedly. So this is hammer #2 and carries a history with our franchise.

Role-playing gamers will recognize the artwork style of The Illuminated Edda from your own massively popular The Fate of the Norns, now in it’s 4th edition. Who and what are your visual influences?

Back in 1993 we fell in love with the works of Arthur Rackham, and we included his artwork in the 1st edition of Fate of the Norns. Ever since, we’ve been very careful in selecting the artists we work with because we wish to keep a very traditionally antique feel in our books. You’ll notice that the text layout tries to mimic a story book and the paper we use is matte rather than the more popular gloss.

This is all by design so that the reader gets fully immersed in the experience. Anime, comic and hyper-realism are nice, but don’t fit The Fate of the Norns style. We look for highly unique styles that can transpose the viewer back a millennium or more. So far we’ve had some real talented superstars onboard.

The Fate of the Norns was first published in 1993, giving plenty of time for criticism and critiquing by others. How have you reacted to good (and negative) feedback over the years? How do you wish you should of / could have reacted, and what advice do you have for other artists putting themselves out there?

I very much love to hear back from the fans. I have a thick skin, and I know I can’t please everyone, so I really don’t mind negative criticism- so long as it’s constructive. If you look on our forums, when we were in BETA for the last book, Denizens of the North, we had received a lot of feedback.

As the manuscript matured, our fans recognized that their suggestions were making it into the book, making them feel like it was a truly collaborative effort and that voicing their good ideas help shape the future of the game. For Lords of the Ash, our BETA membership numbers are at the highest point ever, and I look forward to hearing from everyone.

What should be playing on the stereo when we’re reading The Illuminated Edda?