“I keep waiting for the authoritative condemnation from Mary Beard for my amateur’s exploration of the classics, but it hasn’t come yet!”

“As rich as Croesus” – the expression derives from a king who reigned on the frontier between myth and history. According to Herodotus, Croesus (r.560 to 547 BC) was the first Mediterranean monarch to mint gold and silver coins. His empire, located in modern-day Turkey, rested on the mineral wealth of Sardis, the capital of the Kingdom of Lydia.

In Tim Leach’s The Last King of Lydia – which like all good Classical tales starts in the middle – we encounter a defeated Croesus about to be put to death by his Persian conquerors. Inspired by the writings of Herodotus, Leach sets out on a fictionalised retelling of Croesus’ story, the half historic, half mythic king whose rise and incredible fall from power shook the ancient world.

The Last King of Lydia was shortlisted for the 2013 Dylan Thomas Prize. In 2014 a second installment – The King and the Slave – bookeneded the narrative, recounting Croesus’ later adventures as an object of curiosity in the court of a demented tyrant. Together, both novels explore the nature of identity in crisis, set in a richly detailed vision of distant antiquity.

The Last King of Lydia & The King and the Slave are published by Atlantic Books.

It’s his obsession with happiness that first hooked me in – I’d always thought of it as being a very modern concern. So when I read about his encounters with the philosopher Solon where they debated happiness at great length, it got me very intrigued – I’d never thought I would write historical fiction, but I just became fascinated by this character. Even better, in the source material, the story of Croesus ends just when to me it was starting to get good – if I wanted an ending, I was going to have to write one myself!

Both The Last King of Lydia & The King and the Slave include portraits of historical figures such as Cyrus The Great, his son Cambyses II, and the Athenian law-maker Solon. How did you flesh out the bare bones of biography we have for them? 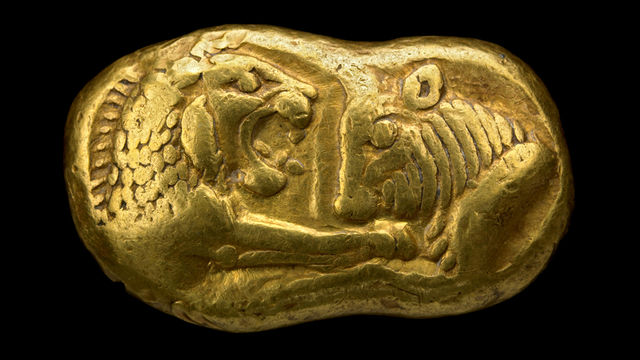 There are teasing hints about their characters in the source material that were useful as starting points – Solon’s blunt honesty, Cyrus’s thoughtful charisma, Cambyses’s insecurity. Mostly, it was just trying to find an emotional connection with them, and going from there – trying to imagine my way on what it might have been like to be in that place at that time. And dialogue scenes are an absolute boon for character creation and development. I learned so much about my characters just from putting them in a room together and trying to figure out what they might say to each other.

How did you manage the parallels with other portraits in historic fiction (such as those between Cambyses & Caligula), did you ignore, embrace or shy away from them?

Cambyses was a tricky one – in the source material, he is such a relentlessly terrifying villain (incest, torture, sadism, murder) that my worry was not just that he would parallel with Caligula, but that no one would believe him (and when we don’t believe in a villain, they cease to be scary). The solution for both problems was to put a lot of myself into the character – to take my own fears and neuroses, turn them up to 11, and make him a monstrous, warped version of myself. That way, not only was I confident that I could make him unique from other historical villains, but that he would still retain some kind of humanity that would keep him relatable.

As well as the portraiture, the novels contain lively landscapes of the teeming cities and sprawling palaces against which Croesus’ story plays out – my personal favourite is the opening of The King and the Slave, somehow akin to the opening lines of Gilgamesh. Have you drawn any direct inspiration from your own extensive travels?

Yes, there are certain cities and landscapes that really stay with you, that seem to be in some way unanchored to time and place. The chaotic medinas of Fez and Marrakesh, the sun drenched Greek islands, the wide open plains of Argentina – these are places that I seem to keep using elements of when I’m creating places in my writing.

Has there been any feedback from scholars of the period?

I keep waiting for the authoritative condemnation from Mary Beard for my amateur’s exploration of the classics, but it hasn’t come yet! The feedback from those classicists who have read it has been extremely positive – I think the fact that my source material, Herodotus’s Histories, is so notoriously unreliable means that no one expects a historically perfect reconstruction. There’s plenty of room for a writer to play when there’s such an intoxicating blend of myth and history in Herodotus’s work.

How did the response to The Last King of Lydia influence the writing of The King and the Slave?

The King and the Slave was mostly written before Last King was published, but the good reviews from the first book were just starting to roll in when I was editing the second. It was a real confidence boost at that stage, and I was able to relax just a little as I was putting the finishing touches to it.

You’re a graduate of Warwick University’s Writing MA where you now teach. What’s the first thing you tell your students?

Be patient, be persistent and lower your overheads! A lot of students come onto writing programs hoping for some quick fix or miracle cure, but there’s no way around it – it’s a long, slow, lonely grind to get anywhere. You can’t shave much time off that process on a writing course, but you can try and make sure people are well equipped to stick out long journey ahead.

Are there possibilities of radio, TV or cinema adaptations on the horizon? Is there an actor you could imagine playing your Croesus?

I would love there to be! It would be tricky to adapt, though. TV would be better than film, as I don’t think the story would compress well into a couple of hours, but you’d need a serious budget to do it well. Radio is a possibility I’d not considered, and could actually work very well, especially given how dialogue focused the books are.

If money were no object? I really admire the people who have some managed to combine being leading men with being interesting character actors in Hollywood – Cillian Murphy and Christian Bale would both have a good stab at it I think, bringing that combination of charisma and vulnerability that is critical to the character. And definitely Russel Crowe for Isocrates [Croesus’ fmr. slave & later mentor] – no one does a better thuggish intellectual!

Obvious question, but what are you currently working on? How about the story of Solon?

I was very fond of Solon, and tried to squeeze as many scenes with him as I could in the story! I’m coy about being too specific about what I’m working on right now, but it’s somewhere not quite so far back in history, and quite a lot colder…

What should be playing on the stereo when we’re reading The Last King of Lydia & The King and the Slave?

Well, I mostly write to instrumental or minimalist stuff – if you want to read it to the music it was written to, then I recommend sticking on some Explosions in the Sky, The xx, Esmerine, M83, or anything similar. Though right at the end of writing the second book, I got weirdly obsessed by The Funeral by Band of Horses, playing it over and over again as I was writing the last few chapters. So better stick that on the playlist too…