It must be heroic happenstance that Mancub opened on the Lyceum stage on the same day, July 17, that Ant-Man came to a (film) theatre near you. The little guy wins out and gets out, but it’s tough going. As for The Children, performed by the senior class after the interval, it is kind of the same story but a whole lot nastier. The despairing cry is, “We’re not animals”. The shame is that no-one told the adults. 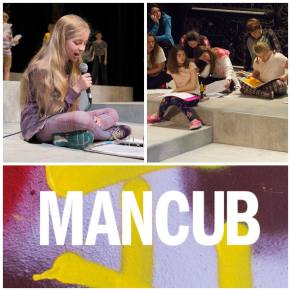 Mancub is Douglas Maxwell’s 2005 adaptation of John Levert’s book Flight of the Cassowary. Paul is in S4. On the good days school is an adolescent aviary; on the bad days, it’s a jungle with teachers in their lairs. A diagram of the human eye is up there on the board in Biology class but Paul only sees foxy Karen (Emma Gribbon) and gulps with nerves. That’s the goldfish in him. He gets a red card in a cup game for roaring at the referee. That’s the grizzly bear in him. He makes friends with the neighbour’s dog (cute and canny Max Hampson) and they chat together. His younger brother, Wee Luke, hates Kipling’s Jungle Book but loves the Disney version. Their Mum and Dad don’t have the imagination to enjoy either.

Xana Mawick, Director, does well to put a cast of 26 on stage all the time and to keep the many episodes distinct. There’s a camera for bonus close-ups and five narrators do a good, clear voiced, job of introducing and accompanying the action. Alexander Levi is Paul, shy but plucky, and able to survive becoming the road kill of insensitive grown-ups; although Tom Borley as football coach, Susskind, is a likeable chump. Best friend Jerry, ably played by Carson Ritchie, is the smart dude with the knockout comeback lines.

The representation and/or mention of those other species, teachers, parents, gran, and – awkwardly, Neds – is a little sketchy, even foolish, but that’s evolutionary studies for you. 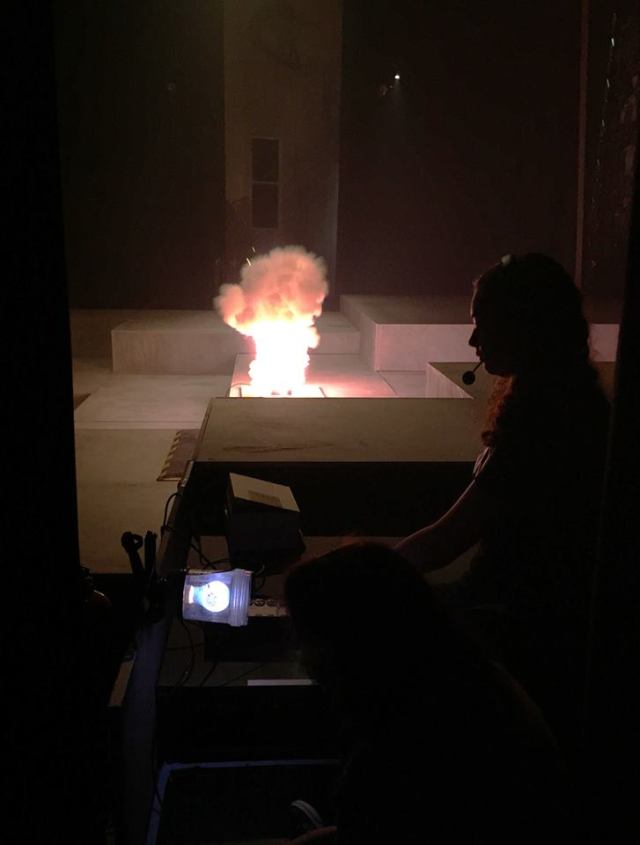 There is nothing ill-defined about Edward Bond’s The Children (2000). It is determinedly and definitely in your face – and there’s a brick to hand. When a mother’s instruction, fuelled by fags and booze, is to burn down a house it is no surprise that blood splatters to an acoustic treatment of The Offspring’s The Kids Aren’t Alright. 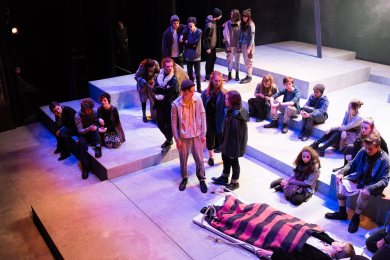 Daughter Jo, in a firm and touching performance by Caitlin Mitchard, does what she is told and is abandoned to a bleak, murderous, environment that offers no features, no direction, no way out (although Fraserburgh is on the map!). Her several – too many? – friends don’t make it. When, at the close, we’re in a harbour with a lighthouse the quiet relief is unlooked for and rather welcome.

There are two adult roles – principally Mum (Jenny Barron) and then the male Stranger shows up. Christie O’Carroll as director must have thought about playing the Stranger himself. Certainly Bond wanted that effect: the dreadful weight and mistaken, if not extinct, certainty of the adult up against the weaker, unscripted promise of the young – and at times it told.

All credit to LYT for holiday performances of a special kind.

Visit the  The Lyceum  archive.