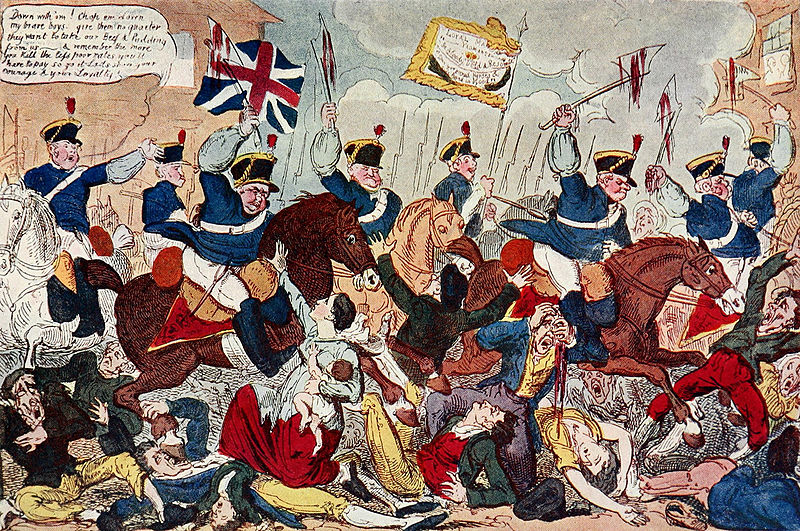 In 1938 the Scots Greys buried one of their own on Edinburgh’s Castle Esplanade. The hero they honoured, Ensign Charles Ewart, had distinguished himself at the Battle of Waterloo by capturing a regimental eagle from Napoleon’s 45e Régiment de Ligne.

Despite his fame and renown in the heady aftermath of victory, Ewart’s original grave in Greater Manchester was abandoned, all but forgotten, for the better part of a century. The neglect Ewart experience in death, was reflected in that of many of his comrades when they returned home to a regency Britain at war with itself.

Colin Brown was a lobby journalist for 30 years, first for The Guardian and then for The Independent, with a couple of years as the political editor of The Sunday Telegraph. Taking Wellington’s description of his own men – The Scum of the Earth – as his title, Brown tells the story of what happened to ordinary soldiers like Ewart after the initial flush of victory wore off.

The Scum of the Earth: What Happened to the Real British Heroes of Waterloo? (published by The History Press, May 2015) To find out more click here.

It was a country in turmoil – hundreds of thousands out of work from farms and factories, wages cut, the price of bread was increased by Act of Parliament, cottagers relying on subsistence farming were forced to leave the land by the Enclosure Acts, national debt increased to 230 per cent of GDP, and there was an economic slump. The Government reacted to the decisive defeat of Napoleon with austerity – the army was cut over five years from 233,000 in 1815 to 92,000, adding to the jobless seeking work. Eventually, the huge changes brought about the industrial revolution brought an economic boom to Britain, but that took another twenty years.

It’s the 200th anniversary of Waterloo. You’ve warned of the dangers of “an anniversary of misty-eyed backslapping”. Is that what has happened / is happening?

My book was criticised as “a left-wing whinge” on Amazon, which underlines the extent to which people want to read about the glory and the blood of the battle, not the uncomfortable truth. 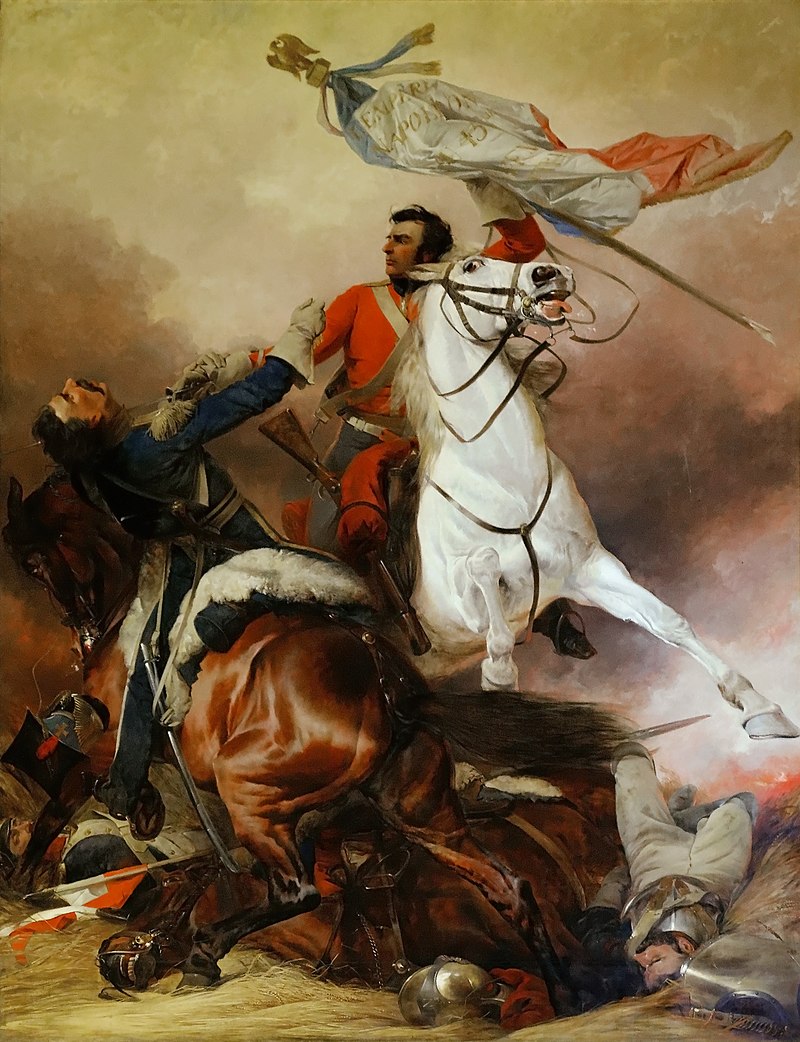 Brits like to think of themselves as great at pomp and pageantry. Are they as good at commemoration vs. celebration?

The organisers of the national service of commemoration at St Paul’s warned guests it was “not triumphalist”. I think they got the balance right.

Which better defines the character and career of the Iron Duke, Waterloo or Peterloo?

Waterloo; he was undoubtedly a great commander at the peak of his ability at Waterloo. Wellington’s political stand was certainly a contributory factor to Peterloo – his fear of revolution; and his failure to respond to reasonable demands for political reform led to his own political defeat by forces which were unstoppable. But there were others to blame for the massacre, including a lack of a proper civil authority that knew how to handle peaceful demonstrations.

Why didn’t Britain experience the political upheavals that beset continental Europe in the decades after 1815?

We came closer to revolution post 1815 than at any time since the civil war of 1542. But repression worked. The Six Acts, including the ban on the press, the ban on meetings, and the suspension of Habeas Corpus, with the gallows or deportation to Australia for minor offences was enough to keep the lid on the seething discontent for nearly twenty years. In the end, the Government had to concede reform with the vote, however limited.

But I also believe the repression worked because it was coupled with a lack of revolutionary zeal among the British public. As I say in the chapter on the Cato Street conspiracy, any would-be revolutionary should study the Cato Street files in the National Archives: they include many anonymous tip-offs from the general public warning the authorities that revolutionaries are plotting an attack on the Cabinet.

Of all the individual stories you’ve uncovered researching The Scum of the Earth, which most shaped your thinking and conclusions?

Francis Stiles and the battle with his commanding officer, Alexander Kennedy Clark, over who captured the Eagle of the 105th Regiment (now in the National Army Museum, Chelsea). The Eagle itself is a moving symbol of war: men shed blood and died for possession of that gilded bird, on top of a black wooden pole. It symbolises the gore and the ‘glory’ of war – it represented regimental pride; it was a reason why the ordinary men stayed and fought, and did not run away. It also represented the grandiose ambitions of the Emperor Napoleon, who wanted his soldiers to be like the Roman legions that ruled the world. The struggle by Alexander Kennedy Clark to gain the credit for capturing it represented a very real battle of class – the ordinary trooper against the landed gentry.

What happened to Stiles was an object lesson in how the army brushed an awkward problem under the regimental carpet: Stiles was paid for his silence, then dumped: he was promoted to sergeant; then in 1816 – the same year that he wrote to an officer asking him to confirm that he, Stiles, not Alexander Kennedy Clark, had captured the Eagle – he was made an Ensign, almost doubling his pay from 2s 11d a day to 5s 3d a day but it was in the West India Regiment which was unpopular because it could mean serving in the West Indies with the risk of malaria and other diseases. On 28th December 1817, he was put on half pay 2s 71/2d a day and effectively discharged from the army. This seems to me to be a plan to silence Stiles. By 1817, nobody was interested in who captured the Eagle. Stiles died in poverty; Alexander Kennedy Clark became Queen Victoria’s ADC.

This story still rankles with some of the NCOs of the Household Cavalry. After reading my book, some members of the Blues and Royals – his regiment – arranged to have a plaque put up to Stiles at St John’s church, Clerkenwell, where he was buried. I am glad I found the painting The Captive Eagle to use for the front cover of my book. But why was the painting in Great Yarmouth Town Hall, and not the National Army Museum? Could it be that the Army still won’t give Stiles the credit?

What sort of places have you visited for the sake of your research, or was it all dusty libraries and the Public Records Office?

I make a point of travelling to key sites to get a sense of place. My aim is to write history like Bill Bryson writes travel books. I therefore went twice to the battlefield at Waterloo, particularly Hougoumont; Salford central rail station to see the car park where Ewart was buried; the back of the Radisson hotel, Manchester, to walk the place where John Lees was battered in the Peterloo Massacre; to Oldham to pace out the route Lees would have taken when he started the march to Manchester; Oldham parish church, where he was buried; Edinburgh to see the Ewart memorial and the Castle where the Ewart Eagle and painting are kept; Walmer Castle, Kent, to see the dining room, where Wellington regaled his guests with stories of the battle and its political aftermath (noted by Earl Stanhope for Notes of Conversations with the Duke of Wellington).

The dusty places were also fascinating – the Hartley Library containing the archive of Wellington’s papers at Southampton University allowed me to hold the letter he wrote in 1813 attacking the ‘scum of the earth’; Apsley House, London, the Duke’s home; and Chethams library in Manchester, for its unrivaled collection about Peterloo.

I also visited the National Army Museum, the Guards Museum and the Woolwich artillery museum. I was surprised to discover that regimental museums are not publicly funded, and heavily rely on amateur volunteers, which accounts for their patchy performance. For example, the Coldstream Guards had none of the archive material I uncovered on James Graham, the “hero” of Hougoumont. I think the big new discoveries in history could come with ordinary people researching the lives of their ancestors.

Do you think of Regency England as an enlightened or a primitive society? Are there social policy lessons we can learn from the period? For example, could there be a place for the “King’s Hard Bargain” as a response to modern social problems?

Wellington favoured conscription. It is hard to see how it would work in peacetime. There are superficial attractions to national service, including discipline and self-awareness, but there are disadvantages – I have seen both in countries where it is still in use, Greece and Cyprus. Wellington is right in one respect – it has to apply to everyone, low or high; it could not be seen as a national service for the ‘working classes’. Middle class kids would have to serve too, and would complain if their careers were put on hold.

A national service for the unemployed, or those facing prison would bring as many problems as it seeks to solve. I think the most important policy lesson from Waterloo is to know our past. Were the defeats of Napoleon, the Kaiser and Hitler allied victories or the triumph of an island warrior race that has been called upon three times to rescue Europe from tyranny? (See my earlier book, Glory and Bollocks). With the EU in-out referendum approaching, it could become more important.

200 years on, do we treat our veterans any better?

The public do – the armed forces chiefs don’t seem to have changed in their attitude to the expendability of since Waterloo. They are imbued with the “can do” attitude, which can be lethal for their men and women. Two examples: before the Iraq war I asked Geoff Hoon, Defence Secretary, whether a) the troops had radios that worked (there was doubt) and b) the equipment they needed. He said he had been assured by the chiefs they had on both counts.

Five red caps died in an ambush because they did not have radios that worked. Men were sent on patrol in ‘snatch squad’ Land Rovers designed for Northern Ireland. As a result, men needlessly died from IEDs or were maimed and are now limbless ex-servicemen having to cope with life on charity and a pension. The chiefs are too inclined to say they “can do”, without saying, ‘actually, what you are asking the men to do is ridiculous. We could save lives by adopting a different strategy.’

For example, what was the point in defending Helmand Province in a hostile environment in the Taliban stronghold in Afghanistan? I sat through debates in the Commons when it was argued that going into Helmand was futile and likely to lead to more casualties. Bush and Blair disagreed, and the army chiefs said: ‘can do’. Now we have surrendered that land to the Taliban… for what?

What should be playing on the stereo when we’re reading The Scum of the Earth?

Never Mind the Bollocks, Sex Pistols (Anarchy in the UK).