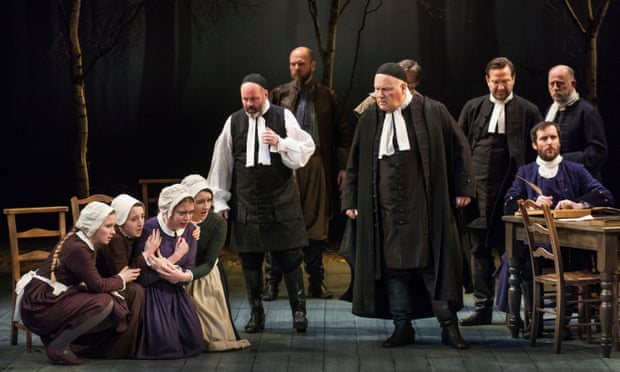 “Just as bleak and brilliant as Miller’s tragedy demands”

Nothing says “a good night” like unchecked hysteria, unopened hearts and unnecessary hangings. That’s why I’m always excited to see a production of Arthur Miller’s “The Crucible”, and even moreso in the beautiful Lyceum theatre. But does Mark Thomson’s staging of Miller’s work deserve a standing ovation or a slipknot? The star rating above may be a small clue as to which is true: this was a beautiful, if flawed, production of a well beloved American classic.

Set in the year 1692, ‘The Crucible’ follows the path of destruction wreaked by mass hysteria, lust and shame in the town of Salem, Massachusetts. As rumours of witchcraft fly and secret affairs are uncovered, what begins as a simple dance in the woods becomes a matter of law, life and death. Lighthearted stuff.

As you might imagine, Miller’s classic demands atmosphere. From the outset, it’s clear that Thomson has a knack for choosing set designers. It’s not often I open with talk about the furniture, but I was extremely impressed with the quiet ingenuity of Crucible’s set. From the authentic, rustic comfort of the Proctor house to the cold rigidity of the courthouse, each setting hit all the marks in terms of visuals. But even further, it wasn’t just pretty – the use of space was downright clever. Each little quadrant of the stage was self-contained enough to render smaller scenes intimate, and yet interconnected enough to make group sections seem cavernously intimidating. And the use of trees for scenery and blocking lent what felt like meters of depth to a finite stage. For set alone, this show ticked all the boxes.

But luckily, the set isn’t all I’ve got to write happily about. As can be expected from the Lyceum, the acting talent on display is considerable – my personal MVP goes to David Beames as the most entertaining and human interpretation of Giles Corey I’ve seen yet. If I could pay him to narrate my life, you’d bet he’d never go hungry.

But aside from pure entertainment value, I was most impressed by Richard Conlon as Reverend John Hale. When I first read The Crucible, I disliked Hale. I thought he was two-dimensional and boring – but none of these problems so much as touch Conlon. No other portrayal of the character has been as compelling or realistic as his, and I’ve similarly never felt for Hale as much as I did in this production. The emotional depth, the body language, the subtle vocal tics; they all come together almost flawlessly. Fan-bloody-tastic.

Similarly, Philip Cairns shines as John Proctor, applying a great amount of force and raw emotion to the character’s more intense scenes. He moves from tenderness to scepticism to fury as if it were easy as breathing – though this is no doubt benefited from acting opposite the likes of Irene Allan as Elizabeth Proctor. The part of Elizabeth is by no means easy: showing an audience the culmination of years of insecurity and indecision without overacting is like slacklining drunk; that’s what I was so pleased to see how powerful the character was in Allan’s hands. Her final scene and famous closing lines gave me chills.

That same strength runs through the rest of the cast. Meghan Tyler as Abigail Williams is wonderfully duplicitous, mixing sensuousness with devious brutality in the same breath. The Putnams (Douglas Russell and Isabella Jarrett) are as abrasive as the narrative demands, and Greg Powrie’s Reverend Parris is pathetic is the best way possible. Even the young company capture the panic and vulnerability of young girls in the hard frontier of the American East.

So, with such a talented cast and clever design crew, why isn’t this a five star show? Predictably, there are always a few flies in the soup.

As a general note, whilst the accent work at play generally good, it was prone to slippage. Often, the cadence showed more sense than the characters by fleeing from Massachusetts to upstate New York – and, on occasion, Cairns’ Bostonian drawl threatened to slide into a strange mix of Henry Kissinger and Arnold Schwarzenegger. Whilst it won’t bother the average Brit theatregoer, those more familiar with the voices of the new world may find it slightly grating.

Furthermore, I had a huge problem with the sound design. Whilst at times it was a dramatically advantageous decision, at others (especially in the courtroom scenes) it was, at best, a distraction and at worst it utterly broke the tension and dramatic pacing of the scene. I found myself consciously wondering why on earth a scene of screaming hysterics and implied cold-blooded murder for the sake of sex was accompanied by a pleasant violin trill in a major key. In any other show this might not be such a large issue, but in one which is so dependent on atmosphere and audience absorption, it gets amplified.

And it’s in the hysteria that we find my biggest complaint with the production. Whilst certain scenes were certainly not lacking in gravitas, the play’s overall arc of tension was patchy. Some sections jump from being devoid of dread to bursting with it – instead of a steadily escalating fever pitch, it jumps from extreme to extreme.

Unfortunately, this also wasn’t helped by the fact that it felt strangely static at points, as if all the fear had been sucked out of the room. There’s a difference between strained silence and dull quiet, and sometimes this production seemed to confuse them.

Do I think these flaws ruined The Crucible? Far from it. Mark Thomson’s formidable cast rides out the few choppy waves this show presented, and Miller’s famous talent for dialogue is hardly diminished. There are definitely more strengths to this production than weaknesses, and the audience chatter at both the interval and end attest to that fact.

If you get the chance, definitely give The Crucible a look. It’s a production that never fails to entertain whether you’re a Miller virgin or a die-hard fan. Though perhaps a little clunky in the seams, the overall fabric of the show is just as bleak and brilliant as it Miller’s tragedy demands. You might not see Sarah Good with the devil, but you’ll definitely see a strong production.

Visit the The Lyceum archive.