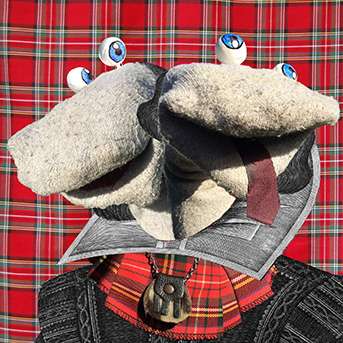 WHAT: “Earth’s funniest footwear return with a brand new show of songs, sketches, socks and violence, taking on The Bard of Avon himself. Howl at their Hamlet, roar at their Romeo and Juliet and peer into their Coriolanus. Plus all the usual satirical nonsense from the two gentlesocks of verrucca.”

Once upon a time there was a stand up comedian called Kev F who was doing a sketch show, and he wrote some two-handers that he didn’t want the actors to bugger up. So he turned up at the writers meeting with a pair of socks on his hands, ducked under the table and put on a silly voice. Turns out the Socks were funnier than anything he had ever done, and went on to steal all his gigs.

Socks Do Shakespeare started trying out sketches way back at the Leicester Comedy Festival in February, and has had a run of 10 full Previews in July from Bristol to Barnes, from Bedford to Blaenavon (plus 6 towns not beginning with a B)

Then the next day (our show finishes just before midnight) go see the art. The Socks and their creator went to art college, and like to remind everyone that Edinburgh in August is full of art, from the brilliant work at Summerhall, to the monumental stuff at the Gallery of Modern Art, the City Gallery, Collective up on Calton Hill, the National Portrait Gallery, the Museum on the Mound and 100 places in between.

If you’ve got to see comedy, obviously our venue (The Gilded Balloon) has the best, but please don’t stick to seeing the folks off the telly. Dip your toe in the water of the Free Fringe, take a gamble on an act who thrusts a flyer in your hand, and by god go and see theatre. There’s still more theatre than comedy in Edinburgh, so don’t let it pass you by.