“The talent neither stops at the singing, nor at the bounds of the principal cast.”

I was part of an unfortunate, if very narrow, generation whose first encounter with Robert Louis Stephenson’s monstrous Mister Hyde was the opening of a terrible Hugh Jackman movie. As a result, questions of the duality of man, the nature of morality and the dangers of unrestrained passion didn’t really factor in for a while. It seems fitting therefore that EUSOG’s latest outing follows the pattern of contrast underscored by its source material: it’s a collection of both dizzying highs and curiously disappointing lows.

Jekyll & Hyde loosely follows Stephenson’s original work, with a few new emotional complications thrown in. It is a musical exploration of the ambition, suffering and fear associated not only with the fraught Henry Jekyll, but its effects on his friends, family and even the city of London itself. And to begin –  as usual – with the ability on display, it’s considerable. The singing talent in this show can’t be denied, ensemble included. Ellie Millar and Giselle Yonace in particular offer utterly breathtaking solos as Emma Carew and Lucy Harris, culminating in a duet that could shatter glass for precision.

And the talent neither stops at the singing, nor at the bounds of the principal cast. Special props go to Kirsten Millar as the world’s most entertainingly jovial prostitute; and to Jana Bernard, whose rare mix of graceful flexibility and natural showmanship lead to an array of angles that’d make an architect weep. Despite the occasional desync in a dance, the ensemble did their job with gusto and skill.

But any praise would be incomplete without hailing new face Stephen Quinn as the titular duo. Powerful voice aside, I found myself extremely taken with his portrayal of Henry Jekyll: he balances ambition, humanity and (perhaps most importantly) a genuine vulnerability during his two hour tenure as the good doctor, and it certainly stuck. Often, mild-mannered Jekyll is the more under-realised of the two, and it was refreshingly welcome to see such care put into his characterisation.

The question then, I suppose, is why this show only has three stars – and why have I personally left it unrated?

Despite the considerable strength of the cast, there are distinct elements of this show that detract from the overall fabric of the performance. Most glaringly, perhaps, is the way in which they handle Edward Hyde. At its core, there simply wasn’t enough contrast or intensity: often, the only difference between the two selves seemed to be his ragged choice of jacket, rather than any significant change in manner. The visceral glee, passionate brutality and utterly malevolent hedonism which typifies Hyde seems to get lost somewhere in the mix – and this is certainly not helped by fight choreography which is so floaty and strangely force-less that it occasionally comes off as comical rather than dramatic. Sitting next to the fantastic choreography of song numbers such as ‘Bring on the Men’, it seems worlds apart. 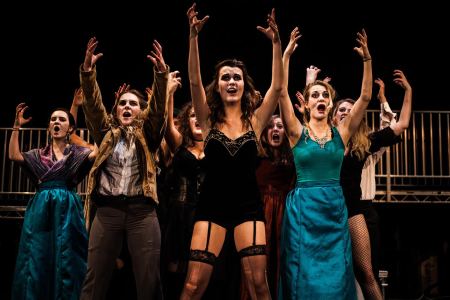 And, most unfortunately, that fundamental element of violence and rage, which seems to be missing from much of the production, runs deeply through its other elements. Without that relish of cruelty, many scenes feel strangely bland for want of a contrast which just isn’t there. Combine that with mics which popped in and out more often than a first year halls cleaning lady and with variable volume levels, which would put Brexit indecision to shame, even when the show was at its strongest, then it was unsurprising that at times I could not hear a damned – or virtuous – thing.

That said, if you’re looking for a collection of entertaining and ear-pleasing song numbers, you’ll like what you get. However, if you’re wanting an exploration of human nature, brutality and debauchery, and a spot or two of vanquishing, then …. No. Upfront this is a strong production but it is let down by its emotional backdrop. For those who aren’t as pedantically focused on its content as I am, it’s certainly not going to sour your night – but walking home through the cold Edinburgh air I couldn’t help but think that Mister Hyde just didn’t show up.