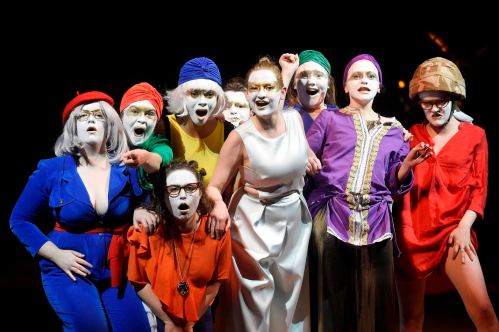 This is a tumultuous inaugural production by the Attic Collective. It has that shameless tumescent quality that really would ‘Make Greece Great Again’. Athens/Attica was still big in 411 BC but had been sorely bashed in Sicily and was hurting. Aristophanes’ Lysistrata must have been excruciating, urgent fun back then and it is remarkable that – in the right hands – it can still have the same effect.

As a play it’s less in-your-face than in-your-crotch. Just look at the tall curvy door, upstage centre, and reckon, pretty confidently, that it’s all about Pussy Power. Then there are the phalluses, not one of leather, but several of rubber and latex, and all impressive, but none more so than the Spartan emissary as gauche walking dick. Naturally enough there is supplication to Zeus for relief from priapism.

The men suffer because the women have crossed their legs. Lysistrata leads a women’s revolt that denies sex to husbands (and wives) until the Peloponnesian War ends. They occupy the Treasury – a smart kick in the balls –  and wait for their men to come to their senses, as it were. They are finally brought to it by the body beautiful of Kim Kardashian, aka. Aristophanes’ figure of Reconciliation. Of course, the women are frustrated too and invent desperate, hilarious, excuses to return home.

This is when a 5th Century revel disarms ‘Call of Duty’. ‘Tits not Targets’ is the message. It’s summery: the men are in a uniform of white shirts, cropped chinos and canvas slip-ons. Not a spear or bronze helmet in sight. Just helmets from the Urban dictionary. Cinesias (Adam George Butler) has his shades. Their leader (Conor McLeod) is a dapper, convinced and convincing kind of chap. Meanwhile the women are a riot of colour with their white faces and ‘war paint’ and they soak the men with Water Blasters. It’s loud too, especially when Charlie West hits his box drum.

Arguably the on-stage debate is one-sided. Determined Lysistrata (Cait Irvine) and cocky Stratyllis (Megan Fraser) reduce the men to defensive huddles and oddly impotent hakas. Deciding  to dump the split Choruses of the old men and women of Athens does tilt the balance in favour of the youthful and the libidinous (no real loss!) and the sense of the words can go AWOL in dionysiac chant and jabber but there’s no doubting the drive and sense of the piece as a whole. Director Susan Worsfold and Musical Director Garry Cameron succeed in sustaining dramatic form, resolved in celebration, from a plot that is about as carnal and abandoned as it gets.

By the by, a Belgian lady senator called for a sex strike in 2011. It was meant as a provocative joke but it excited the Christian Democratic opposition to remark that “Politicians are not there to strike. On the contrary, politicians are there to arouse the country.” Hear! Hear! (Aristophanes).

Go to the Attic Collective with edtheatres.com.

The Edinburgh49 archive at the King’s Theatre