“Taylor Swift is not only an amazing songwriter with relatable and eloquent lyrics, an incredible singer, but she’s also just such a lovely person.“

Lisa Kowalski is a young Scottish singer songwriter and performer – and most of all she is a huge Taylor Swift fan. To coincide with Taylor Swift’s ten year anniversary as a performer Lisa decided to celebrate and to put on an event to bring together all those ‘Swifties’ out there. Well, some of them at any rate.

Lisa’s event ‘Ten Years of Taylor Swift’ was held in Glasgow and Edinburgh and featured a fantastic collection of young, upcoming musicians from around Scotland who each performed their own versions of Taylor Swift classics, from her earlier country tunes to some newer pop princess anthems.

She’s not only an amazing songwriter with relatable and eloquent lyrics, an incredible singer but she’s also just such a lovely person. She’s so kind to her fans and she’s so real. I also just connect with her lyrics and how passionate she is about songwriting. Writing music is my favourite thing to do and she’s really inspired me to be brave and vulnerable when I write my feelings into songs.

How big is the Swiftie community in Scotland?

Taylor sold out the Hydro in minutes, so I would say there’s a fair amount of Swifties! I’ve made lots of friends in Scotland that are her fans and it’s nice to get to talk about her and her music to people without them getting sick of me.

Have you had support from Swifties outside of Scotland?

We had a Swiftie from England fly up to Scotland for the last show which was pretty insane! He also helped us to set up a promotional website for the event which has ended up being really useful.

For this year’s event we had someone from America ask to play and cover all of the plane costs herself! Unfortunately we had all of the acts sorted but it’s pretty insane to have so much talent asking to perform and going to such great lengths to do it. 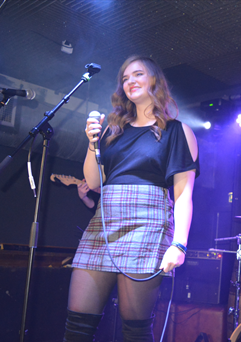 You had a fantastic line up of young artists performing in your show. How did you bring the talent together?

All of the acts are people I’ve seen perform at gigs that I’ve also done! I chose these people not only because they’re all absolutely incredible singers and performers but also because I consider them all good friends of mine now! The show really brought us all together and I’m grateful for it.

Were all of the artists who performed already devoted Swifties before the show?

Not all of them are huge fans but they still managed to take the songs, make them their own and perform them with so much passion. Everyone who performed likes different kinds of music and writes their own amazing songs but they all came together to celebrate one pop/country artist and they did it amazingly. 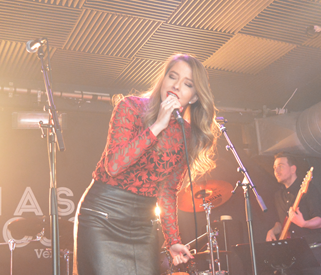 How did the event in Edinburgh compare to the first event in Glasgow?

Both events were so amazing but the Edinburgh gig was in a smaller venue which I preferred. It made the show more intimate as everyone was much closer and you could see everyone dancing and smiling a lot more clearly which was really nice.

What’s the one thing you know now that you wish you’d known starting out on this journey?

There’s going to be some ups and downs but it’ll be worth it! Working really hard is definitely the key for success but when it pays off you’ll be so relieved and happy that you devoted as much time and energy as you did.

Do you plan to organize more shows in the future?

There’s a lot of factors to consider before we dive into organising another event as it definitely isn’t easy but I would definitely love to! Making other artists and an audience happy made me really happy and I would love to do it all again.

Lisa, you also performed at the show. As an artist do you have anything exciting lined up for 2017?

Within the next month I’ll be releasing my debut EP of original songs! I’m really proud of all the songs on there and I can’t wait for people to hear them in a new way! I’ll be performing at the VAMOS festival this year which is exciting!

If you could ask Taylor Swift one question what would it be??

It’s hard to just choose one question! I would probably ask for advice on making myself known in the music industry and building a loyal fan base.