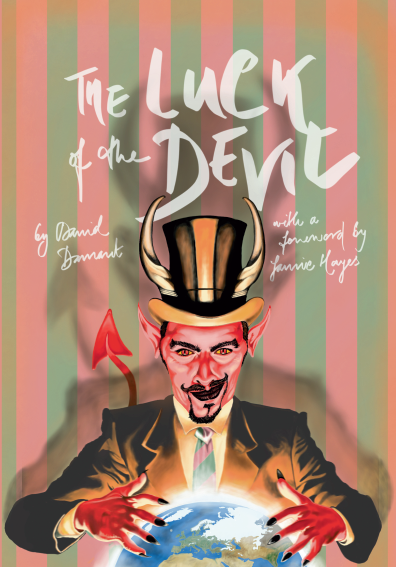 “I can imagine that Sullivan’s music for the Devil would have been excellent, and Gilbert would have loved the plot.”

Vienna, May 1931. The Baron Bretzenny is a worried man. His banking house is bust. It seems nothing can prevent the Bank Bretzenny from becoming just another casualty, lost amid the global wreckage of the Wall Street Crash. As one of Vienna’s foremost public atheists, the Baron literally hasn’t got a prayer. Then a mysterious visitor offers the Baron a way out of his troubles… but at what price?

The Luck of the Devil is the coruscating debut comedy of financial guru turned scribbler, David Damant. Damant is at once both a respected elder statesman in the realm of finance, a pioneer of Modern Portfolio Theory in Europe, and also a keen observer of his fellow creatures, their vanities and profanities.

At his London club David has, in addition to the world premier of The Luck of the Devil, arranged for a performance of the melodrama Maria Martin and the Red Barn, as well as more than a dozen operas or parts of operas, each directed by the celebrated Jamie Hayes. These have included Dido and Aeneas (starring Jean Rigby), the second act of Tosca (Sue Bullock & Robert Hayward), the essential scenes from Don Giovanni (Robert Hayward again), and no less than four performances of Offenbach’s Not In Front Of The Waiter.

A browse of his social media profile reveals that David’s interests include food, wine, opera, history, and conversation – he has even, on suitably rare occasions, been known to allow his interlocutors to get a word in… although never the last one.

The Luck of the Devil was published in March 2017 by 49Knights. To find out more click here.

Why the Devil? Why an Austrian banker? Why the interwar years?

I had been revolving in my mind for some time the idea of a Faustian contract in which, unusually, the Devil has to ask for help. After the stock exchange crash in New York in 1929 the trigger for the serious depression on this side of the Atlantic was the failure of the Viennese bank the Creditanstalt in May 1931, so I thought that an Austrian banker in trouble at about that time would need money and would provide the basis for the plot.

I then added the idea that the Roman Church was about to issue an Encyclical saying that the Devil was no more than a psychological construct – something that the Devil would not like at all – and he needed human help to stop the Encyclical – the name of which Ad Deliramentum Expellendum was crafted for me by an expert in Papal Latin. I have portrayed the Devil in an fairly honourable light (accepting his standpoint as the Father of Evil). 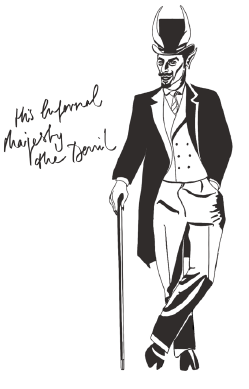 You’ve been involved in dozens of productions down the years. How did those experiences shape The Luck of the Devil?

Except for one play before this one, all the productions I have been involved with since 1987 have been operas in whole or in part. But operas are drama so I suppose that I learnt a bit from those productions. A greater influence was P G Wodehouse, who used to construct his novels as though they were plays, with the scenes balancing each other in the sense of what happens in each, and the various characters given balanced appearances – one cannot introduce a big character and then drop that character half way through. So I followed that rule in my play.

You’ve not written a play before, but you have written on financial matters, history, music etc. How have your previous endeavours informed this one?

Writing so much taught me to write clearly……in any case a lot of what I wrote in the financial world had to be translated, or anyway read by those who were not native English speakers – so I had to be clear. A lot of writing these days is not transparently easy to follow, My aim is always to have the reader (or the listener to the play) able to concentrate on the ideas which I (or a character) is expressing, and not have to work out from the language what the point might be.

When I thought of writing the play I read quite a lot of other plays to get the structure in my mind, and was pretty dismayed by the sordid or unhappy nature of the plots – failed marriages, hopeless careers, children and parents at loggerheads etc etc.

The drama centres on a banker who has run out of money and needs bailing out. Where did you get such an incredible notion from?

Your own background is in banking and the city. Bankers aren’t massively popular at present. What can they do to improve their public image, and what should us non-bankers always bear in mind about the sector?

The general view of bankers is completely unbalanced. The main reason for their unpopularity is the financial crash, which was caused not by them but by the Central Banks keeping interest rates too low, by the Regulators not checking on balance sheets, and by the Chancellor (Gordon Brown) stating frequently that he had abolished downturns. What does one expect bankers to do in such an environment? Sit on their hands with all that cheap money and refuse mortgages?

Of course bankers have behaved badly in specific areas, but one does not attack the game of football because FIFA was corrupt, or attack athletics because many athletes take drugs, The financial system is a tremendous asset to this country – we have a great talent in that area – but I cannot see the image improving much. Most people do not understand the enormous value of efficient capital markets in using everyone’s savings more efficiently, and of attracting vast amounts of business to this country…… another difficulty is that the salaries seem so high. I see that several football managers earn more than £10 million a year. But people understand football. 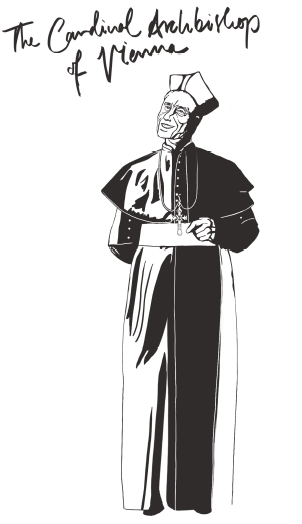 Do you believe in the Devil? Is he abroad in the world of men?

I believe that the Cardinal Archbishop of Vienna in my play was right (originally). The Devil is no more than a psychological construction in the mind of the human race, but has even so some importance as part of the human psyche. Jung said that if the Christian religion was not true, it had to be psychologically valid, since otherwise it would not have succeeded, and the Devil is part of that analysis. Incidentally, the real Cardinal Archbishop of Vienna in 1931 was Cardinal Pifl……..

What makes for good theatre?

This is a matter beyond my sphere of expertise. Chekhov stands out, and is of great interest in any attempt to answer your question.Often very little happens in a Chekhov play until the middle of the second act, when they all meet and decide not to go to Moscow. Yet his plays stand out as an amazing analysis of the human predicament. Note that the plot is merely the skeleton on which the real drama is hung. That is why so many films of great novels miss the point. They can tell the story, maybe a good one, but miss the dimension which make the whole thing a great work of art.

Wuthering Heights is the extreme example. Shakespeare is in a different league from everyone else – one can only be astonished at his genius. Incidentally, it seems clear to me that Shakespeare wrote Shakespeare. It is impossible to imagine that he could have been in and around the London theatre scene for so long without anyone noticing the difference between his plays and his mind in conversation, not to mention having to wait whilst he rushed off the get input from Bacon or Lord Oxford. Also the comments by Ben Jonson and others.

What has been the response to The Luck of the Devil thus far?

The response is enthusiastic by those who have read it, but not many have read it outside my circle. Those in my circle are probably amazed that I have written a play at all. All profits from the first printing of the first edition went to a Charitable Trust. 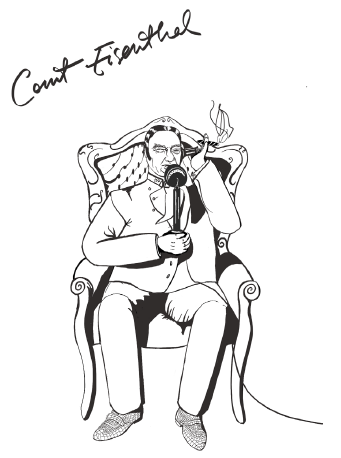 What’s next for The Luck of the Devil?

I have sent it to the BBC as it is perfect for radio. As regards a second play – Wodehouse when talking of novels always said that the second one was the real test of a writer, and no doubt the same is true of plays – I have started on a plot dealing with the incompetent bureaucracy of Heaven, where Stalin on arrival is not recognised (he uses his real name Josef Vissarionovitch Dzhugasvili) and is given the wrong papers, so that he is very nearly through the Pearly Gates, much to the delight of Satan.

What should be playing on the stereo when we’re reading The Luck of the Devil?

This is not an easy question. Any reference to the Devil brings to mind the Charles Williams piece The Devil’s Gallop, which the more ancient of your readers may remember as the theme for Dick Barton, Special Agent on the BBC, which was succeeded by the Archers (the Archers have never been the same since Squire Lawson-Hope sold the village). But the Gallop is for a melodramatic Devil, and for my play we need something more sophisticated. Handel’s Zadok the Priest would do, since the long and restrained build up is full of tension, relieved by the triumphant ending.

If the play were to be made into an opera, I think that Gilbert and Sullivan would have done it rather well. I can imagine that Sullivan’s music for the Devil would have been excellent, and Gilbert would have loved the plot. Or even better Offenbach – we have put on his Not in Front of the Waiter four times at my club. His humorous wit is sophisticated and some of his music might also do for background music when reading the play.