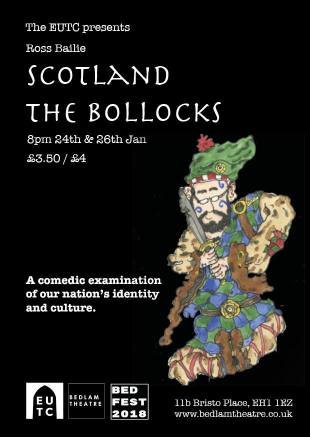 “If all history lessons were like this, I would know and understand a lot more of my country’s story“

To explore the EUTC’s Bedlam Festival 2018, ‘BedFest‘, we decided to go along to see Ross Baillie’s stand-up routine Scotland the Bollocks, an enthusiastic rendition of stories (in)famous in Scottish history.

Straight from the word go Baillie is genuine and entertaining, if slightly unorganized at times. He is alone on stage, although he always has his stage manager Huw Jones at hand to help him via a screen in the background. When Baillie gets a little confused or forgets what he is talking about next, Jones is quick to provide funny pictures, anecdotes and explanations.

The atmosphere remained relaxed throughout as Baillie told exciting stories of Mary Queen of Scots and ….. of the Bank of England. He engaged with an audience that seemed shocked yet highly amused by his hilariously sarcastic outbursts and at times slightly inappropriate sense of humour. I was quite happy as I was not sitting in the front row.

Baillie questions our national identity as he explores the mishaps and (if this is what we can call it) the ‘series’ of very unfortunate events which have fallen upon Scotland since the beginning of history as we know it. His show is almost a mock Horrible History lesson mixed in with some modern jokes about Trump and Brexit. One of my favourite moments was a make-believe Twitter argument between famous people from the 18th century.

At times I was unsure if Baillie was genuinely confused or if his disorganisation was indeed part of the act –  either way, although his performance could have been a little more polished, the show worked really well. If all history lessons were like this, I would know and understand a lot more of my country’s story.

Visit Edinburgh49 at the Bedlam archive.