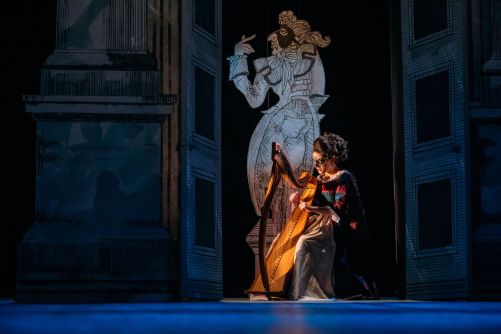 “Jaunty, diverting and quick. A noteworthy woman playwright is not short-changed”

There was gleeful mention of the ‘shit wagon’ and of the reeking ‘Nor Loch’ but these early New Town characters keep their stockings a blinding white and the hems of their fancy gowns spotless. It’s that kind of play: a slight comedy of appearances. Or should that be ‘sleight’?

The Belle’s Stratagem is a jaunty piece, giddy even. Its leading man is Doricourt (Angus Miller), although he’s led by the nose, and he has ‘l’air enjoué’ of a chap with too many Air Miles and too many hours in Club class. Well, he would have, except this is 1788 when Gold Cards and guineas were more likely gifted by pedigree than work. He’s back in Edinburgh after his ‘Grand Tour’ of assorted lounges, demoiselles and signorinas and finds himself betrothed to Letitia (Angela Hardie), known almost from birth and now two years out of boarding school, and he’s not impressed. She, Letitia, is pissed at this – vulgarity clearly crossed Princes Street – and is determined to have her man love her or lose her. Meanwhile, Sir George Touchwood (32 and of the Jacob Rees-Mogg brigade, benign branch) is back in town with his lovely, guileless, wife, Lady Frances. Beware! Cad about, Courtall by name (geddit?), who will have the lady.

Tony Cownie has adapted Mrs Cowley’s Belle’s Stratagem of 1780 and removed the whole play to Scotland, aka that ‘subjugated bunch of hills north of Berwick’. Deacon Brodie is stealing about; Doricourt and the honourable Saville (John Kielty)  are soft Jacobites; Laetitia’s father is Edinburgh’s Provost and Laetitia (in disguise) wins Doricourt’s heart and the audience’s with an aching ‘Will ye no come back again?’ The best joke of the evening is Courtall’s as he goes off to France for an assignation with the Revolution.

Theatre history is all over this piece, if you look for it. The big brother of Cowley’s original has to be George Farquhar’s Beaux Stratagem from 1707. Farquhar had arrived in London in 1697 from Dublin’s wonderfully evocative Theatre Royal at Smock Alley. Cowley’s play opened at the Theatre Royal Covent Garden. Nicola Roy’s Kitty, a prostitute with a proper sense of what’s decent, would fit well into those dodgy streets. She’s the key to foiling Courtall’s foul intrigue. The two widows, Racket (Pauline Knowles) and Ogle (Roy, again) give lechery a good name by repeatedly calling out the hypocrisies of male behaviour but enjoy eyeing the men themselves. 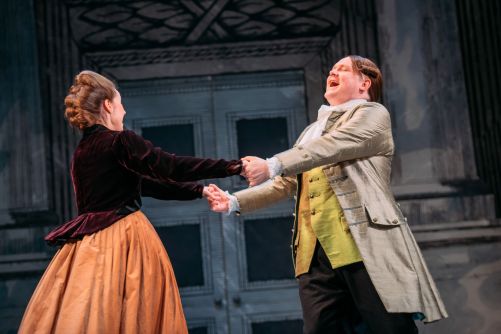 Historians place The Belle’s Stratagem at the endpoint of a period when the Comedy of Manners went bourgeois. Marriage and compatibility within a marriage become a pair and so enter Sir Edward and Lady Frances, who (for me) are more interesting and entertaining than an infatuated Doricourt and the infantile Laetitia of the first half and the minx Laetitia of the second. Grant O’Rourke plays the country squire (ok, laird) as if to the manor born. He’s a kind fellow, whose daft helplessness (check O’Rourke’s real comic quality in the Venetian Twins) rallies to the call of defending his wife. He ends up an endearing character and – a near no-no in the Restoration comedy of times past – a deserving husband. And Lady Frances (admirably done by Helen Mackay) is bold enough to love him true once she has established her own rights, which again is rather refreshing. The New Town will be all the better for their rectitude during their three months residence in town! Laetitia’s father, the Provost, is more typecast as the lookout for a wealthy son-in-law but Steven McNicoll gives the part considerable warmth and humanity, not least in a party dress.

There’s pretty music, dancing, a masquerade, numpty grumpy footmen, and squeaky clean, impressively silent Heriot Row facades but all the same I longed for some ruggedness, more spit and bite. The gossip columnist, Flutter, is played by an impish John Ramage and that gets close, but finally it’s light and undemanding. The ‘modern’ script is frequently diverting and quick, actors help it on enormously, and a noteworthy woman playwright is not short-changed, but the intrigue unwinds too rapidly and I found much of the humour either forced or slack.

Go to The Belle’s Stratagem at the Lyceum

Visit Edinburgh49 at The Lyceum  archive.