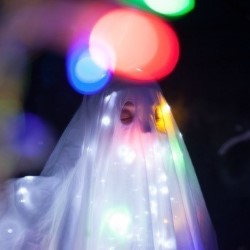 “I still spend a lot of time in the Sainsbury’s looking at all the biscuit products that never made it to Australia.”

WHAT: “A show about life. Performed by a ghost. For the love of god. Laura Davis pushes into new ground in her internationally acclaimed, multi award-winning show Ghost Machine. Lauded as one of the strongest and most unique comedic voices around, Laura Davis is unconventional, cathartic and exhilaratingly hilarious. Ghost Machine sees audience members returning multiple times to celebrate this darkly honest, constantly surprising, existential extravaganza. Winner: Best Indie Show at Melbourne International Comedy Festival and Best Comedy at Melbourne Fringe. ‘An original and provocative hour in the company of a unique mind’ **** (List).”

I came in 2017 for the first time to do my show ‘Cake in the Rain’ at Edinburgh and at Soho Theatre.

I moved from Australia where I’ve lived all my life, to London where I’ve lived for six weeks now. I still spend a lot of time in the Sainsbury’s looking at all the biscuit products that never made it to Australia.

I wrote and toured this show GHOST MACHINE in 2015 throughout Australia and have been performing it ever since. I also toured it to Kuala Lumpur and it’s very hot dressing up as a ghost in the jungle.

They should go and see Alice Fraser, ETHOS which is the show that I directed this year. They should also go and see James Nokise, over at The Stand.