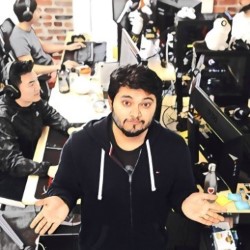 “I graduated from law school after living in San Francisco for the past 3 years specializing in refugee law and also start up law. So really the moment I can help a refugee who invents something, my non-comedy career path will be set.”

WHAT: “Silicon Valley dominates the news with the richest man in the world (Jeff Bezos), a website that helped spread fake news and swing a presidential election (Facebook), and a future presidential candidate (Mark F*cking Zuckerberg). Join Silicon Valley native Sid Singh, fresh off his best-selling comedy album Amazing! Probably, returning to Edinburgh to take down Silicon Valley’s toxic tech culture. From tech’s invasion into our personal lives, to the rampant sexism and racism that festers behind closed doors, the world of tech has never been more problematic or more powerful.”

This is my fifth time doing Edinburgh and my first new hour since I released my first comedy album “Amazing (Probably)” last year! I love the Fringe and am excited to be back!

I graduated from law school after living in San Francisco for the past 3 years specializing in refugee law and also start up law. So really the moment I can help a refugee who invents something, my non-comedy career path will be set. I also only went to law school initially to please my parents so to actually be done is one of the weirdest feelings in the world.

As I mentioned above, I’ve now been doing stand up for almost a decade and most of my comedy was very introspective and self-deprecating. Then I moved to San Francisco after having been gone for 10 years and my perspective completely changed. My hometown has basically been sold off into a playground for the rich. Thanks to law school I was able to become one of the heads of the Homeless Legal Services and also volunteer for the Legal Action Resources Clinic and see first hand how the city has changed for the worst and actively hurt people who need our help the most.

So I decided to write a show about that, specifically how the tech billionaires who control much of San Francisco are crazy and should get a lot less respect than the working class that still make up this city. Despite the fact that it’s my first ever show with a message (which would normally go against my general brand of New York styled comedy), I believe the show can be one of my funniest ever too.

Honestly, the reality of the Fringe is that you’re best served watching as many shows as possible to get as many perspectives as possible. So in addition to the shows I’ll recommend, please do just wander about and get talked into seeing anything that strikes your fancy.

As for shows that I do want to specifically recommend: Droll by the Owle Scheme Theatre is such a fun show. Basically, the premise is what if a bunch of really fun and talented performers put on a play from 400 years ago that was ILLEGAL at the time it was written and didn’t take themselves too seriously? The result is a really fun time. As a man raised with a large amount of toxic masculinity that he has to overcome, I was shocked by how much I liked this play, especially one that describes itself as experimental classical theatre.

As for comedy, go watch this amazing list of people if you can: Dan Audritt, Tamar Broadbent, Ed Night, Aatif Nawaz, Peter Michael Marino, Jamie Oliphant, Rahul Kohli, and Eshaan Akbar. They are all so different from each other and that is what makes them also so unique and distinct in super interesting ways.