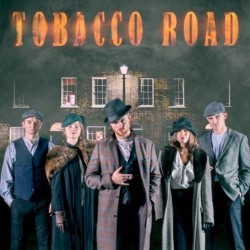 WHAT: “Following their sell-out All Quiet On The Western Front, Greenwich Partnership Award-winners Incognito return with their explosive physical style to tell the story of five resourceful young men and women attempting to carve out a place in the murky underworld of 1920s London. In the wake of the Great War, can they find the fame and wealth they crave or will their desperate need to belong lead to disastrous consequences?”

No this isn’t my first time! I first performed at the Fringe at the age of 15 with Young Pleasance. We did John Godber’s ‘Teechers’ which was the most amazing fun with all the 80’s music and hair. After that I performed with them for 3 more years before moving into production. The year before last I worked in the Pleasance Press Office before producing for Incognito. This will be my 8th year at the Fringe, I think it’s safe to say I definitely have the Fringe bug.

Lots of great things have happened to us as a company since Edinburgh ’17! We were fortunate enough to win the Les Enfants Terribles Greenwich Partnership Award and have received some great support from Greenwich Theatre, we have welcomed two new cast members into the company and are making some more great work for the Fringe this year!

The show is called Tobacco Road and it’s the story of 5 young gang members carving their place in the murky underworld of 1920’s London. We’re merging the fact with the fiction to bring you the trials and tribulations of post-war Britain and those who felt left behind. The company are devising the piece as a group with everyone contributing to the writing. As it’s set in a specific time and place we feel it’s really important to properly research the era and incorporate our unique style of physical theatre into the story. We did a little work-in-progress for it in December 2017 but are looking forward to getting back into the rehearsal room.

I’m the lucky one to be producing this show with my love associate and assistant producers Cindy and Lydia and we’ve had some great mentorship from James at Greenwich Theatre.

The company itself have been around for 5 years as part of the Pleasance Future initiative as XYP and this is their second year as a completely independent company. We’re hoping to tour the show in 2019 so watch this space!

I’ve had the highlighter out on my Fringe Festival guide already! I’m really looking forward to Camilla Whitehill’s ‘Freeman’ which will be at the Pleasance and Spies Like Us’ ‘Woyzeck’. Also, ‘The Insignificant Life and Death of Colin McKenzie’ at Greenside looks great and the Les Enfants show ‘Flies’!

More than anything I’m just looking forward to being up there and seeing anything and everything, I’m a sponge ready to absorb!