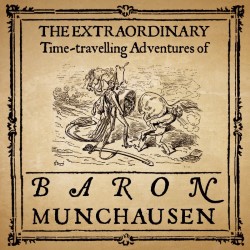 WHAT: “Amazing tales, elegantly told. Top award-winning comedians and improvisers tell extravagant stories, all based on The Adventures of Baron Munchausen. There will be swords, duels, elephants, castles built of cheese and all of it completely and irrefutably true! Discover how the Baron invented morris dancing, how his actions saved the Isle of Skye from sinking beneath the waves, why every fourth child in Bruges is named after him and other fantastically delightful stories. This show will delight adults and children with its wonderful joie de vivre and other pretentious words!”

Well, modesty prevents us from mentioning that ‘The Extraordinary Adventures of Baron Munchausen’ was nominated for “Best Kid’s Show” at the Leicester Comedy Festival this year. If we weren’t so modest and could tell you that this show is an award-nominated show, then that would definitely be the biggest thing that has happened to us this year…oh apart from discovering a living dinosaur, but that’s another story.

Well, the show is, of course, based on the real-life adventures that we have all had whilst in the company of Baron Munchausen. Fortuitously a chap named James Wallis also wrote a role-playing book based on the great Baron, with permission we used some of his suggestions for the absolutely true tales that we make up on the spot. Last year the show existed as a loose framework where guest improvisors came and told stories, the very best of those acts were invited to join the company and since the last fringe, it’s visited the Glasgow International Comedy Festival, Leicester Comedy Festival, Shaftesbury Fringe and the Stanley Fringe. We are hoping that the show will tour the UK following the Edinburgh Fringe.

For families then we highly recommend Bumper Blyton at 16.10, Underbelly, Bristo Square. John Robertson’s Dark Room for Kids (even though it did pip us to the post for Best Kid’s Show in Leicester). Star Trek vs Star Wars – a cracking show that settles the argument about which is better forever (well, it doesn’t but it’s a lot of fun).

For adults: Worst Show on the Fringe, Subway, 69 Cowgate 2.30pm Only acts who’ve ever had a one star review can appear! 101 Comedy Club Hanover Tap 2.30pm. And Will Seawards Spooky Midnight Ghost Stories. At the Gilded Balloon. At midnight. Obviously.