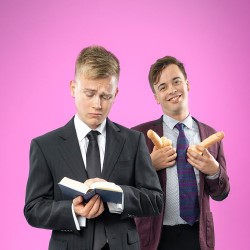 “Ultimately though, an unfavourable imbalance of talent and arrogance can only get you so far.”

WHAT: “More perverted, more depressed, more jokes… the gays are back! ‘The first true gem of the 2017 Fringe’ ***** (BroadwayBaby.com). Mark’s parents are dead. That’s not a joke, though it is really funny. He and Will are also gay – in the modern sense of course, they’re certainly not happy. Mark’s stand-up about being a gay orphan meets explicit gay parody literotica from Will (think 50 Shades of Gay). Two gays, one orphan, absolutely no limits. ‘Very well written… horrifyingly funny’ **** (EdFringeReview.com).”

Mark: It’s our second as ‘comedians’ – we’re hoping to pre-empt any snide reviews with those quotation marks – but we both went up the year before with a couple of plays and Will again the year before that.

It does get increasingly less overwhelming as the years go by but in a way more unforgiving; once you become more aware of how things work you’ve got less of an excuse to not be smashing it. Ultimately though, an unfavourable imbalance of talent and arrogance can only get you so far.

Will: For similar such self-deprecating humour, come see the show!

Will: Guy off Grindr. Holy christ.

Mark: I was the runner up in the 2018 Max Turner Prize, a pretty competitive comedy competition in South London, which was great!

Will: Best I could have managed would have been to ‘hobble up’. Seriously, he was HUGE.

Will: It’s something of a sequel to our 2017 Fringe stand-up show of the same name. We’ve both written it and have produced it alongside our colleague Will Penswick, who’s taking his own stand-up show ‘Dank Verse to the fringe (not to be missed!). The three of us came together (lol) last April; Mark and I through Uni and Will and Mark through school and since then it’s been…well, it’s been.

Mark: The last show was put together quite quickly from bits of stand up we’d both done. This time we’ve experimented across several previews in London, Brighton and Bristol and the resultant show is much more exciting; it’s a live gay sketch/stand-up/multimedia comedy extravaganza! There’s a bit of everything in there. We get up on stage and make jokes about being gay in as many different ways as possible. If all goes well it should be making the rounds in London in the months following the fringe.

Will: At its heart it’s an exploration of what it is to be gay…or at least it would be if it had a heart. It straddles silliness, darkness and unsentimentality in a way you might not have seen at the Fringe before.

Mark: We actually run several comedy nights in South London with Will Penswick and we can’t wait to see some of the acts we’ve hosted up at the Fringe. To name but a few: Adam Hess, Kiri Pritchard-McLean, Ross Smith, Olga Koch, Flo & Joan, Rob Oldham, Ken Cheng, all guaranteed to be well worth an hour of your time and several units of your money.

Will: In addition to ‘Pity Laughs’ and Will Penswick’s ‘Dank Verse’ we’re also bringing up a play: ‘Space Doctor’ at Gilded Balloon. It’s a family-appropriate, hilarious sci-fi spoof complete with time travel and questionable alien outfits, do check it out!