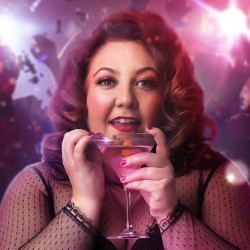 “I’m thrilled to be making my debut and can’t wait to explore Edinburgh.”

WHAT: “Celebrating poor life choices and an unconditional love of vodka, direct from New York City. This Garland for the Grindr era is ‘a force to be reckoned with’ (BroadwayWorld.com), desperate to escape Trumpland and be let loose on Scotland! Join Tori and her band The Shame Spirals on an audacious musical journey of slurred autobiographical stories and songs she stole from other people. Set to the music of Lady Gaga, Queen, Edith Piaf, Pink and more. You’re in for ‘an absolute thrill’ (HuffingtonPost.com). ‘Sheer delight… what a marvel’ ***** (BritishTheatre.com).”

It is!! First Fringe and first time in Scotland! I’m thrilled to be making my debut and can’t wait to explore Edinburgh.

#Thirsty is an hour of sassy commentary celebrating bad decisions and my unconditional love of vodka. Mixed in with the stories are songs I stole from other people like Lady Gaga, Queen, even Judy Garland. I wrote the show based on personal experiences and, with the help of my wonderful music director Jesse Kissel and my fabulous director Seth Sklar-Heyn, we created a really great shameless musical journey of poor life choices. #Thirsty is produced by Robin Rayner in association with Steve Richardson and Joe’s Pub at the Public Theater. I’ve been working with Jesse and Seth for the past 6 years since I began doing my shows at Joe’s Pub in New York. I began working with Robin Rayner last year and we premiered a very early version of this at The Vault Festival in London. It’s changed quite a bit since that run and we are really thrilled to show it to an Edinburgh audience. After Edinburgh, we will do a one night only performance of it at Live at Zedel at the Brasserie Zedel in London on August 29th. And after that, I would love to take it on tour!

I’m really looking forward to seeing fellow Joe’s Pub performer and New Yorker Murray Hill’s show at the Gilded Balloon. I’m also excited to see Velma Celli and The Worst Little Warehouse in London at Assembly. And you don’t want to miss the most charming magician, Tom Brace, in his magic show over at the Pleasance Courtyard.