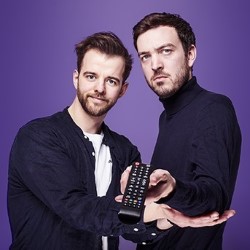 “As a comedian you’re whole year seems to revolve around August so we’re really excited to head back. It’s a bit like a summer camp for comedians.”

WHAT: “After a sell-out debut show, innovative sketch duo Sisters are putting you in control of their highly anticipated second hour. ‘A genuinely exciting new voice in sketch comedy’ (Telegraph). ‘Stands out as a must-see’ (EdFringeReview.com). ‘Given the double act genre a real shot in the arm’ (List). ‘A fantastically dark sketch duo with a bright future’ (BroadwayWorld.com). As seen on BBC Three and heard on BBC Radio 4.”

WHERE: Pleasance Courtyard – Pleasance That (Venue 33)

This year will be our second full show, the follow up to last year’s sell-out debut show: ‘White Noise’. In terms of fringes, this will be the 7th year we’ve been at the fringe, either performing on our own, testing out material or working on other shows. As a comedian you’re whole year seems to revolve around August so we’re really excited to head back. It’s a bit like a summer camp for comedians.

Taking our debut show to London’s Soho Theatre in April was an amazing experience. We’ve seen so many incredible acts perform there over the years so to do a run of our own was a real milestone for us. We also played Latitude festival for the first time this Summer. I heard The Killers were really excited to warm up for us.

This year’s show is the product launch of our own sketch On Demand service, in which we attempt to hand over control of the show to the audience. If all goes to plan then it should run in a different order each day. Like last year it’s entirely self produced and written by the pair of us. We’ve previewed it in London for a couple of months and at Latitude Festival and would love to take it further afield after Edinburgh.

Some of our favourite sketch acts are returning to the Fringe this year like Sheeps, The Pin, Beard and Lazy Susan as well as new double-act Moon, so sketch fans will be spoiled for choice this year. Other than sketch, Ben Pope’s debut stand-up show is a must.