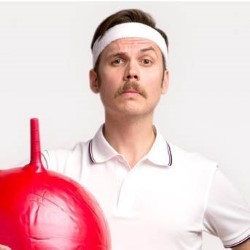 “I bought a window box. It’s probably the most adult thing I’ve done.”

WHAT: “Do you have the heart of an athlete, but the skills of a toddler? Then this is the show for you! James Hancox is rubbish at sports. As a response he’s invented his own, and plans to unveil them to the world. Remember, if you can’t beat them, just make up a different game and beat them at that instead. Star of 8 Out Of 10 Cats Does Countdown and the award-winning Abandoman. ‘Lightning quick wit… has us all laughing uproariously’ ***** (GutterCulture.com). Nominated: Best Comedy Award, Fringe World Perth 2018.”

I’ve been to the Fringe four times before with Abandoman, but this is my first time solo!

I bought a window box. It’s probably the most adult thing I’ve done. I spent a weekend researching which plants grow in shady areas. Oh, and I was nominated for a comedy award (Perth Fringe World).

My show is called Sports For The Unsporty. I’ve always been awful at sporting things, so this year I’ve decided to make up my own sports and teach them to Edinburgh. The sportmaking formula is quite simple as I see it: take an action; repeat that action for 90 minutes; get really good at it; become the face of crisps like Gary Lineker. The show is produced by Sharon Burgess Productions. I took it to Perth at the start of 2018, where it received 5 star reviews and a Comedy Award nomination.

JOEY PAGE, JOSH GLANC and KATIE PRITCHARD are all doing gloriously silly stuff at the moment. DAN ATTFIELD’s show last year was a funny blend of Google-based nerdery and musical comedy, so I’m looking forward to seeing this year’s show. If you like surreal games, check out ZAZUTINANY. Or for the perfect Fringe experience, go see the 6-ft bearded bombshell GINGZILLA in The Bubble (the same venue as me!)