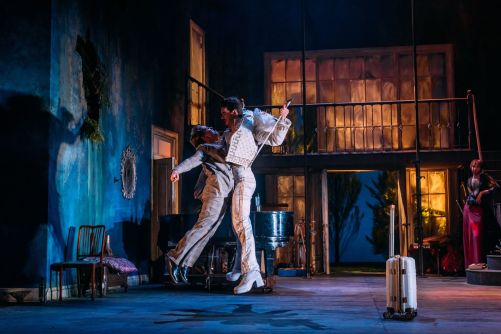 Where to begin with this eye-catching season opener? Well, you should accept that music is indeed the food of love and that Frank Zappa is a legend, and then go to 1966 for Freak Out, the debut album of The Mothers of Invention. Side one, track six, is How Could I Be Such a Fool? (Answer: in Malvolio’s case, stupendously) and on side two you’ll find Any Way the Wind Blows, (not so freaky; more early Beatles) which nicely covers Twelfth Night’s alternative title, What You Will, with sax’, flute and clarinet.

The ‘mothers’ of this co-production from Edinburgh’s Lyceum and Bristol’s Old Vic are Wils Wilson and Ana Inés Jaberes-Pita, director and designer respectively, who brought Cockpit to the Lyceum last October. And, Wowie Zowie (.. track 7), do they pull out all the stops this time around! If mellow vibes come colour saturated and swaying with the dance moves of the early 70s, then this Twelfth Night is in the mix.

Suave Duke Orsino may have musicians ‘attending’ but these actor-musicians displace him, helped by a grand piano centre stage and blinding, wonderful costume. Were those magenta or crimson loon pants on an elongated Curio (Meilyr Jones)? Andrew Aguecheek (Guy Hughes) is a winged vision in white, gifted by ABBA, on platform shoes. Lovelorn he may be but his outing on piano to start the second half is awesome. Aly Macrea directs the band with customary, unassuming coolness, while any resemblance to Frank Zappa is accidental. It’s a delight to hear Dylan Read sing and move as Feste, once you’ve stopped admiring the blooming purple peonies on his dress. 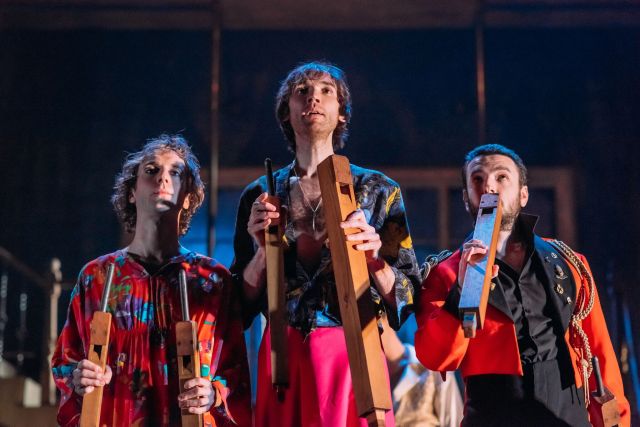 Maria wears her furry mules to mischievous and joyful effect. You can forget quite how vital she is to the pace of the piece, and played well – as here by Joanna Holden – how easy it is to like her at the expense of Viola and Olivia, laden as they are with love and identity. Malvolio, the major-domo of rectitude, of proper clothes and estuary English, has no chance but, boy, does he have a go at embracing the ‘other’ side! Christopher Green has taken on (and created) many parts but this is probably his largest codpiece to date. He is also a fine singer and together with Messrs. Jones, Hughes, Macrae, and Read you do – for once – get a truly festive and entertaining Twelfth Night.

But what of love, with or without drink and desire? Frankly, they’re all subdued by fun and playacting, which the text proves it can support. Olivia (Lisa Dwyer Hogg) suffers the pangs the most, possibly because she has grey trousers. Sir Toby becomes Lady Tobi (Dawn Sievewright) who belches less but has all the gusto of the portly knight and even has room for a moment of pregnant melancholy. Viola (Jade Ogugua) and Sebastian (Joanne Thomson) are the identical twins that you’re happy to take on trust and see reunited whilst Orsino (Colette Dalal Tchantcho) has the hauteur not to care in the slightest that he has married the ‘wrong’ twin. Only Antonio (Brian James O’Sullivan) is really disappointed in love and he wins a sympathetic “Ah’s” from the audience as he exits, hurt.

When you can accept that a lava lamp and a squeeze box is a police car you know that you’re in expert hands. This is quite a rare Twelfth Night, suffused with theatre, and I enjoyed it.

Go to Twelfth Night at the Lyceum

Visit Edinburgh49 at The Lyceum archive.