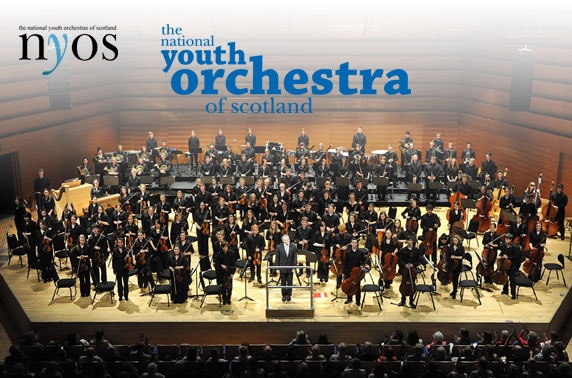 “I have never heard Pictures played so well.  Ever.  By anyone.”

There is much talk in educational, local political and musical circles about youth and classical music today and where it is going.  I have a slightly different take to those who wish instrument teaching to be free for all, who I think miss the point.  Musical appreciation for all certainly at the infant and possibly early primary stages, but nothing is more likely to put someone off its joys than to learn something because they have to rather than because they want to.  Instrumental technique requires commitment, dedication and practice.  Money that is freely spent on other leisure pursuits can usually be redirected if wanted.

Serious youth music is channelled by the National Youth Orchestras of Scotland, which is not so much an orchestra as a movement, comprising three orchestras and two jazz combos, with illustrious patrons such Sir James MacMillan and Nicola Benedetti.

It is greatly to the RSNO’s credit that they devote such commitment to youth music, the more so because they integrated the orchestra’s 40th season into their own along with the creation of a new partnership.   The young people had the privilege on the night of being under the baton of the RSNO’s Principal Guest Conductor, Elim Chan, and of accompanying the uber talented Steven Osborne in Rach3.

As the players came on stage and warmed up full of brio I knew we were going to be in for a fun evening, even if fuelled on enthusiasm alone.  I was dismayed that the house was only half to three quarters full, but of course every conceivable parent, grandparent and sibling was there.  Often youth orchestras are capable of the very highest standard of delivery.  We would see.

Accompanying a soloist requires a different type of playing than when it is an entirely orchestral piece, the dynamics are more accentuated, you have to play quieter than you would wish a lot of the time.  The NYOS clearly understood this under the accessible and supportive conducting of Elim Chan, but perhaps they hadn’t reckoned with the bravura playing of Steven Osborne in Rachmaninov’s Piano Concerto No 3 In D minor, Op. 30.  To my utter astonishment, notwithstanding what I have said about Chan’s supportive style, she took the work really fast.  The tempo for the first movement is Allegro ma non tanto.  Clearly Chan forgot or chose to ignore the non tanto.  Boy!, it was fast, and Osborn played both fast and loud.  Very loud, it was an absolute virtuoso performance, but this meant the orchestra/soloist balance was often wrong with the orchestra playing too quietly apart from some confident solo instrumental passages.  As everybody settled in after the mammoth first movement the strings came into their own in the Intermezzo: Adagio with some exceptional pizzicato from the double basses (one of their proud parents was right in front of me and gladly pointed him out).  In the final movement Alla breve everyone had a good time as they brought this monumental, demanding work to a glorious conclusion.  Osborne rose from the piano stool, modestly took no bow alone and immediately referenced the orchestra.  He then treated us to something “quieter and slower”, one of Rachmaninov’s glorious preludes.

It transpired, after the interval, that this would be a “concert of two halves”, my slight reservations about some of the playing in Part One swept aside as the band was given their head in a full on performing, rather than accompanying role.  First up was Andrea Tarrodi’s (b. 1981) short orchestral piece Liguria, inspired by the composer’s 2011 visit to six of its small villages.  Dramatic from start to finish it showed off the orchestra’s credentials, enjoyable to listen to in the modern idiom, if somewhat derivative.  The waves depicting Onde reminded me of Debussy’s La Mer.

The final work in the programme was Ravel’s orchestration of Mussorgsky’s Pictures at an Exhibition.  This is a work guaranteed to bring the house down, and what impressed me was the joy, yet discipline and sheer musical accomplishment that the young orchestra brought to it.  Not a hint of vulgarity, clear, taut delivery, and the full gamut of strings, wind, brass (including two bass tubas), percussion (including tubular bells and two harps) giving us the full big orchestra experience.  I slept on this before finally convincing myself of the veracity of the happy note that I wrote before leaving the auditorium:  “I have never heard Pictures played so well.  Ever.  By anyone.”  Well done NYOS, you are a testimony for youth music.

Go to the National Youth Orchestras of Scotland