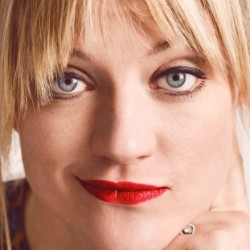 “I tell jokes about domestic bliss – and sometimes I tell the truth.”

WHAT: “Amused Moose Best Fringe Show 2018 winner. Award-winning stand-up comedian Tania Edwards explores these emotionally incontinent times and explains why it’s imperative to repress our emotions. But just how easy is it to be bashful and brazen, coy and courageous (and make sure everyone notices)? ‘A dark, dry and hilarious show’ ***** (VoiceMag.uk). ‘Cuts daggers with sharp one-liners’ (Glamour).”

I’ve been clocking in at the dream factory since accommodation was cheap. I’ve gigged off the beaten track, down piss-soaked alleys, and in an elusive basement at noon where before each performance the bar staff evicted anyone who wasn’t carrying ID – most people at lunchtime – it was a challenge. This year I’m at Monkey Barrel which is fantastic.

Joining The Cutting Edge team at The Comedy Store. And having a baby… I’m discreetly knocking them out between Edinburgh shows.

I’m a stand up. I tell jokes about domestic bliss – and sometimes I tell the truth. More generally it’s about my struggle to be a narcissist in the current climate. Everyone’s so self-obsessed these days it’s almost impossible to be the biggest dick in the room.

If you’re a punter and you want to have fun – definitely more stand up – Candy Gigi Markham, Danny Ward, Luke McQueen, Tiff Stevenson, Lou Sanders, to name a few. If you’re an act and you want to crack the fringe – look out for anyone crying into their pint – find out where they’ve gone wrong and try to avoid making the same mistakes.