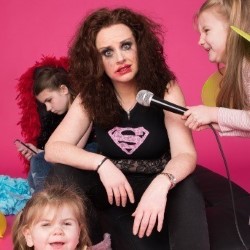 “The team working on the production is a highly international blend of people.”

WHAT: “Honey, a freelance journalist and single mother of four (and a half) seeks control, agency, confirmation and solvency from her rebellious daughter, disappointed mother, skeptical friends and imperfect men. Three (or four) therapists have so far failed to help her, so it’s time to try a different kind of talking cure. Honey must tell her story to find out how it ends and where it begins. Will she find what she’s looking for, whatever that is? Honey is a comedic one-woman show from Finland featuring Scottish actress Sarah McCardie embodying eleven triumphantly dysfunctional characters in one hour, precisely.”

This year will be the ninth year that Ace-Production will be attending the Fringe. During these nine years, Ace has produced eight pieces of work for the festival. Ace is also one of the initiators and coordinators of the From Start to Finnish project.

Last years production of All The Lights are On received big interest from companies around Europe looking to produce the play.

Honey is a play written by the Finnish playwright Tove Appelgren and produced by the Finnish company Ace-Production. The play had it’s Finnish premier at Åbo Svenska Theater in Turku in 2018. The play was then translated to English and the idea of taking it to the Fringe emerged. The team working on the production is a highly international blend of people: the playwright and the production company is Finnish, the actress is Scottish, the director is British and the Sound and Light designer/manager is Spanish. After the Fringe we hope to get a tour with the show in the UK and to sell the rights internationally.

All the shows that are a part of the From Start to Finnish showcase; The Desk, Ali & Alpo, Shine and Ejaculation – Discussions about female sexuality.