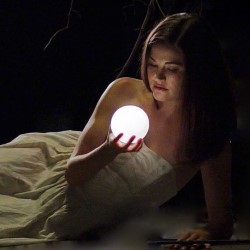 “You don’t have to be helpless and a victim to your own doubts.”

WHAT: “What if you could meet your inner demons? Delve into the cobwebs of our heroine’s mind and watch her inner demons fight for control of the light. A new magical realism drama integrating original award-winning music.”

For two of our company, it is their first time. For three others, I believe it is their second time. For me, it’s my fourth. But it’s my first as Executive Producer, Writer, and Director. My first fringe was in grad school at Royal Conservatoire of Scotland. As part of our curriculum, we were required to take the train in from Glasgow and see some shows and attend workshops and talk backs. I was hooked after that. I returned a second and third time with an international theatre company and worked behind the scenes as an assistant director, vocal coach, and technical supervisor. I think that’s one of the reasons why I love the Fringe so much, you have to have many hats, collaborate with your team, and constantly evolve and learn in order to survive and thrive. I never leave the Fringe without expanding my mind on what constitutes as theatre and entertainment. It exhausts and inspires. And we are so ready for that.

We’ve had some really great milestones since August of last year. Our play had a VIP staged reading at a Broadway House and premiered Off-Off and Off-Broadway. Those are probably the biggest.

Our show is called “I Am” and it’s a magical realism piece about physically meeting your inner demons and how they can affect your self-care. I wrote it during a time when I was once again transitioning in my career and feeling a bit lost. I noticed that every conversation I seemed to have with the 25-45 demographic was the same; everyone was questioning their dreams and adding to their own self-paralysis. This show analyses where those voices in our heads come from and hopefully reminds us that self-care is a choice. You don’t have to be helpless and a victim to your own doubts.

oooooooo there are a ton of shows that I’m super excited to see. But I’d say my top 5 are: Connie Wookey: Denied (underbelly), Hitler’s Tasters (Greenside), Fempire (Assembly Rooms), Austentatious (Underbelly, which I go every year), and Enough (Traverse).