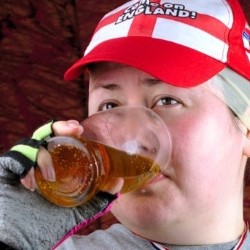 “The show goes on a journey through Brian’s life to try to find out where it all went so right!”

WHAT: “Top Bodybuilder Brian will demonstrate that shadow boxing outside Paddy Power can be a lifestyle choice. From the mind of weird comedian Jayne Edwards (as seen on BBC Three), comes a multidisciplinary and extremely silly comedy show about loss (wife), gain (weight) and whey protein. A lo-fi spectacle with a cult following, Brian is finally ready to open the door of his caravan and let the world in. ‘A multi-layered spectacle of comedic talent’ (JAMmag.com). ‘A unique comic’ (Skinny).”

It is my first Edinburgh! I’m so excited to bring my first solo show. I’m proud of the show and it is exactly what I want it to be. And I’m pumped for the whole Fringe experience. Especially because I’ve got a new cagoule I’m looking forward to cracking out!

I was in a sketch for BBC Three. It was a dream to go to the BBC to film it. Internally I was freaking out with excitement. Externally I was acting very cool about it, wearing sunglasses while endlessly drawing on the end of a cigarette, flicking the butt onto the floor before whispering “where do you need me” in a husky voice.

The show is about a middle-aged ex-bodybuilder called Brian. He’s “Readers Wives Submitter of the Year 1995” and now lives in his caravan in Rhyl after his recent divorce. In his spare time he tries to crack the recipe to Lucozade in an attempt to pay off his whey protein debts. He’s based on men I knew in my hometown and the current political climate. The show goes on a journey through Brian’s life to try to find out where it all went so right! It is multi-disciplinary and very very silly. After Edinburgh, I hope to do more festivals with this show and maybe organize some performances in independent venues.

Delightful Sausage are not to be missed, ever. They are the so funny and their shows are so charming, gruesome, inventive. Sean Morley is another act that if you didn’t see at the Fringe, sorry, but you’ve not really been to the Fringe!! The man is single handily making a new genre of comedy. Foxdog Studios are musical, hilarious, robot making magicians. All these acts are treasures, and be warned: they will sell out a lot!