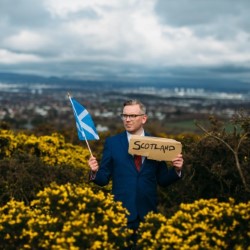 “The concept is that the audience are in fact a focus group who must vote on what questions make it into the first ever Scottish Citizenship Test.”

WHAT: “Citizen Scotland cordially invites you to take part in a focus group that will define the very future of the nation – for better or worse. An immersive theatrical experience that confronts the unique absurdity of Scottish identity. Award-winning writer and spoken word artist Kevin P Gilday (Sonnet Youth, National Theatre of Scotland, BBC) turns a hilariously caustic eye on notions of nationhood and patriotism. From history to inventions, language to neighbourly relations, the independence referendum to the toxic mire of present political debate – we gleefully dissect the still-beating dark heart of the country.”

No, I brought my first show to the free fringe in 2013 and have been performing regularly since – working my way through a series of pub basements, dungeons and karaoke booths as I did. It’s my first time working with the team at Assembly Roxy though, very much looking forward to staging the show in their fantastic space.

Alongside developing the show I also completed a manuscript for my first full length poetry collection. It’s called Sad Songs for White Boys and will be published by Speculative Books in July. It also features some poems that appear in Suffering from Scottishness so there was a lovely crossover between the projects.

Suffering from Scottishness is a darkly comic piece of immersive theatre. The concept is that the audience are in fact a focus group who must vote on what questions make it into the first ever Scottish Citizenship Test. This provides the backdrop for the main character Joe, and the audience, to explore the absurdity of Scottish identity and perhaps come to some personal conclusions about nationalism.

I’ve written the show as well as playing Joe, with my company Sonnet Youth producing. We’re really excited to be part of the Disruption Fest at Assembly Roxy – not only are we subtitled ‘The Best of New Theatre’ (no pressure), but we get to work with the brilliant High Tide.

There’re no immediate plans for the show post-fringe but I’m looking to bring the show to both an international audience and local Scottish communities in future.

They should 100% catch #Girlhood by my Sonnet Youth partner Cat Hepburn. Other shows I’m excited about seeing: Daddy Drag by Leyla Josephine, Umbrella Man by Colin Bramwell, This Script by Jenny Lindsay, Confessionals by Victoria McNulty and, of course, Colonel Mustard and the Big Bad Wolf. I’m also looking forward to catching some new stand-up from the likes of Amelia Bayler, Rosco Mcclelland and Chris Macarthur-Boyd.