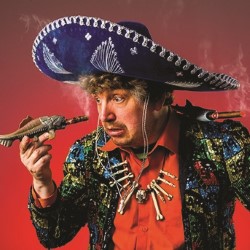 “I’ve been doing this for ten years which is giving me the shakes, baby.”

WHAT: “Twonkey’s 10th show is about grotesque cake decorating shop in the Dordogne that has been secretly making fake weather since 1982. Mr Twonkey says, ‘Last week I knocked on the door licking my lips in anticipation. The shopkeeper opened the door, a tiny woman who was all baggy eyes with a hard miserable face and fast little legs. I had made a horrible mistake?’ ‘He creates wonderlands of weird’ **** (Scotsman). ‘Mind-bending fables’ **** (Times). ‘An operatic imagination’ **** (BeyondTheJoke.co.uk). ‘A one-man cornucopia of the bizarre’ **** (FringeGuru.co.uk). Winner: Malcolm Hardee Award for Comic Originality.”

WHERE: Just the Tonic at The Caves – Just the Wee One (Venue 88)

No I’m ten years in, the new show is called Twonkey’s Ten Year Twitch meaning I’ve been doing this for ten years which is giving me the shakes, baby.

I won the Malcolm Hardee award for Comic Originality in 2016, which was nice. I was also nominated for the Time Out and Soho Theatre award TO&ST in 2013, which helped a lot at the time. However I’m waiting for next big wind the willows to blast onto new horizons. The thing I have enjoyed the most down the years was performing as part of the cast of my own play in 2016 Jennifer’s Robot Arm. The play was a matchbox melodrama about a girl whose delusions, while consorting with a demonic friend and a circular saw cost her an arm. It was a lot more fun then it sounds. It felt great been part of a gang making a really amazing piece of work it was a lot less lonely then working on a solo show, I do need to do it again but it costs an arm and leg to do.

I write the show myself but various musicians help me out with the songs. My latest show follows on from early discoveries such as finding the right framework to hang my balls off. What I find works best for me is to start fast and silly with lots of short power punch’s then I cut to seaside whirlpool inner core meaning as if by magic I pop up somewhere else as someone else and then tell the main story. Sadly explaining it only makes sense to me but its fun trying. So far it’s been to Brighton, Buxton, London, Prague and Leicester and next outer space.

Johannes Dullin Plays the Devil looks fun to me, He was amazing last year. It’s on at 19:20 Heroes at Dragonfly. He’s a German/Swiss character-sincere-existentialist stand up comic….what’s not to like?