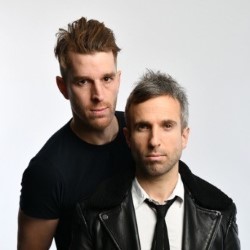 “Becoming a Papa … would be the obvious thing to write but it’s probably a draw between that and discovering that they’re making a new He-Man movie.”

WHAT: “We’re granting you, the audience, access all areas! A-list, pop-star celebrities Felix Scoot and Lee Delamere welcome you behind the velvet rope to a self-help masterclass on how to become as famous as they are! Drawing on their sizeable years in the music biz with chart-topping band Felix & The Scootermen, they’ll teach you how to write the hits and play the fame game… and win… big! Are you prepared to find out if you can make it in the Fame Game? ‘A masterclass as great as 2008!’ (Chico).”

It isn’t. Al and I are also in a band called The Hoosiers who will play Edinburgh whenever we can because the buildings look nice and the crowds are beautiful.

Al and I originally thought about making a tongue-in-roof-of-mouth guide book, outlining the pitfalls and trampolines of fame for those getting signed by major record labels then we thought we’d add a large anecdotal element from our experiences, THEN we thought we’d make it a self-help seminar, THENNNNN we thought it’d be remiss not to play some songs in it. We needed people to produce, write and “be” in it and we only knew each other. “Invention is the child of necessity”.