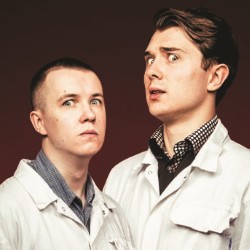 WHERE: Pleasance Courtyard – Pleasance Below (Venue 33)

It’s Fringe No. 2 for our act, Moon. Our first show was basically us doing our act (grotty little sketches, songs and jokes based on our bleak provincial worldview) while waiting for a curry to be delivered. This show is about how our venue is trying to destroy us while we get on with the show.

We did our show at the Soho Theatre which felt like a lovely achievement. Jack’s Nan came down for it and it all felt very proper.

So Moon is basically a product of writer Jack loyally bringing routine ideas to Josh like a golden retriever brings sticks, and they devise it together and then perform those routines to either acclaim or mild bafflement in the UK’s most elegant comedy venues. The wonderful Show and Tell are making it all happen and equally wonderful Jordan Brookes is directing it. It’ll be premiering at the Fringe and our plan, God willing, is to force it upon more people post-Edinburgh, but currently, no stadium tour lined up.

Jordan Brookes is a must. As is Phil Ellis. For more sketch larks, see Lola & Jo and Giants.