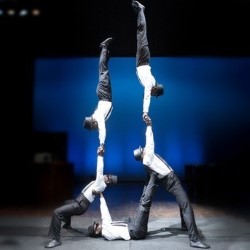 “We did lots of big shows… but maybe one of the most important was the performance we did in front of Pope Francis in the Vatican.”

WHAT: “The circus show that everyone is talking about! Joining the energy of Africa with a rhythm and blues sound, five unleashed acrobats perform their comedy tribute to cult movie, The Blues Brothers. In an elegant American bar, the chairs, tables and surroundings become props for new feats of acrobatic daring. Showcasing a vast range of skills and disciplines, watch in awe as the Black Blues Brothers amaze with hilarious dance challenges, fire and somersault routines, human pyramids and much more. An astonishing performance for all the family!”

It’s the first time, and we are very excited about that! In those years we have been travelling all around Europe, but we have never been to the U.K. before. We performed in theatres, festivals, big events… with the sun and with the rain, so we don’t fear Scottish weather! Edinburgh is a great city, before and after the show we surely walk around the city to discover its treasures!

We did lots of big shows… but maybe one of the most important was the performance we did in front of Pope Francis in the Vatican. It was during the Jubilee for Circus and Travelling People and… wow! Doing our acrobatics in such a place, in front of the Pope. I think we’ll never forget that experience!

We are a group of friends that one day decided to become acrobats. We come from a social circus trust in Kenya called Sarakasi. It helps young people in trouble, giving a hope through art. Some years ago we met there Alessandro Serena, Professor of Circus History and producer from an Italian theatre-circus company. We feel a very good vibration with him and we started collaborating with him. We came in Italy and we create the show with him, basing on his experience as a director and producer and on our acrobatic techniques and energy. Now that show did more than 500 dates all around Europe and we want to do 500 dates more! And more! After the Fringe we are going to tour in Italy, Spain and other countries, then in the winter season we’ll do several shows in theatres… We’ll never stop!

Ed Fringe is full of very good acrobatic and circus shows. The Fringe itself is a huge circus! Last year we saw My Land, a poetic show of Recirquel company. What a show! If you want to see what contemporary circus can do with ancestral myths, but most of all if you want to see great artists sharing their energy with you, that’s the show you are searching for!