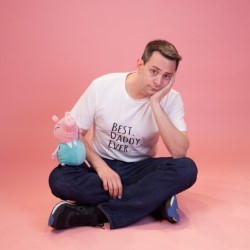 “Before starting stand up comedy I was an actor, and one of the biggest jobs I had was playing Daddy Pig in the official stage production of Peppa Pig. Fast forward a few years and I became a dad in real life, and suddenly Peppa and her family were back in my life again.”

WHO: Philip Simon: Writer and Performer

WHAT: “Having played Daddy Pig in Peppa Pig, when Philip became a dad surely there was only one expert to turn to for parenting advice? Yes, that’s right, you’re not misreading this; Philip really did play Daddy Pig in Peppa Pig (the stage production, not the TV show, don’t get carried away!). Join Philip for an hour of award-winning stand-up comedy about dating, parenthood and, of course, Peppa Pig… just don’t bring the kids! Jewish Comedian of the Year 2015. BBC New Comedian Shortlist nominee. Writer for Mock the Week. ‘Never less than hilarious’ (The Stage).”

This show will be my debut hour, but I have been at the Fringe every year since starting stand up comedy in 2011. Usually, it was just for a week or so to do some spots and show my face. Last year was my first time going for the whole month so I could do a work in progress of the current show.

I’ve ticked a lot of professional boxes this year. I’ve continued to work as part of the rehearsal teams for Mock the Week and Taskmaster, and I’ve also travelled more for gigs. Apart from the UK, including The Comedy Store, in the past year I’ve worked in Belgium, Germany, Turkey, Crete, Cyprus and Israel, and next year I’m already booked for a run in Dubai.

Before starting stand up comedy I was an actor, and one of the biggest jobs I had was playing Daddy Pig in the official stage production of Peppa Pig. Fast forward a few years and I became a dad in real life, and suddenly Peppa and her family were back in my life again.

As well as a (not-so-child-friendly) look at the world of Peppa Pig, I wanted to explore a number of themes in my show, including fatherhood and the importance of raising boys in today’s f*cked up world, thinking especially about gender stereotypes, equality and feminism.

I’ve done some work in progress shows at various festivals, but Edinburgh 2019 will be Who’s the Daddy Pig’s official debut. Depending on how the show goes and how it’s received I’d love to be able to tour it, especially looking at other festivals around the world (Peppa Pig is shown in 180 countries) and possibly linking it with mental health charities, especially those helping men coping with depression and their mental wellbeing.

I’m also running a compilation show with Aaron Levene called “Jew-O-Rama”, which brings the best Jewish (and JewISH) comedians at the Fringe. That’s at Whistlebinkies everyday at 5:15pm.

Some other people I’m excited to see are Joe Bor who’s doing a lovely show about his grandfather’s friendship with the actor Herbert Lom. He’s also doing a character show featuring “Posh Climber Jasper Cromwell Jones”. I’ve always enjoyed watching Jenny Collier’s shows each year, as well as Rachel Creeger, Aaron Simmonds and George Rigden whose preview I saw recently, along with Jen Brister, Abandoman and Mitch Benn. Oh, and if you want to be taken completely out of your comfort zone for some bonkers comedy brilliance, then you must go and see Candy Gigi Markham’s show. Don’t ask, just go, and thank me later!