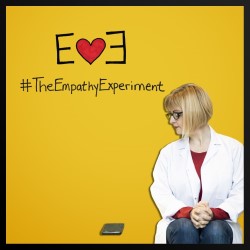 “The subject matter resonates strongly with people, and has sparked some animated and urgent discussion about how we use our phones and how we connect with each other.”

WHAT: “Is empathy facing extinction? Are smartphones to blame? Multiple slam-winning Canadian poet Rose Condo returns with her latest spoken word show. Embarking on a day of no mobile phones, Rose delves into tech addiction and compassion using herself as the test subject… think Dr Jekyll meets Dr Seuss. Join Rose in the final hour of her experiment as she madly tries to capture data, record findings, navigate withdrawal and prove her theory that empathy can be saved. Runner-up for Best UK Spoken Word Show at Saboteur Awards 2017. ‘Emotionally charged performance’ (BroadwayBaby.com). **** (Winnipeg Free Press).”

I spent two glorious years (2003-2005) living in Edinburgh, and loved it. My first time at the Edinburgh Fringe was in 2004, working for the University of Edinburgh Fringe Office. The following summer I worked for the main Festival Fringe Box Office on the Royal Mile. They were both bonkers but beautiful experiences. I saw some brilliant work and made amazing friends. But I also remember thinking that actually getting to perform in the festival was some crazy pipe dream.

Now, fifteen (15!?) years later, I have acted in two productions (DESERT BLOOM and NOISELESS & PATIENT) and performed two spoken word shows (THE GEOGRAPHY OF ME and HOW TO STARVE AN ARTIST). This year I am bringing my third solo spoken word show to the Edinburgh Fringe. I am over the moon excited to be performing THE EMPATHY EXPERIMENT at the Banshee Labyrinth venue all month. I’ve seen some awesome spoken word there in past.

Big shout out to the PBH Free Fringe team, who work super duper hard to make performing in the Edinburgh Fringe financially available to artists.

Big huge news for me was getting an Arts Council England grant to develop THE EMPATHY EXPERIMENT. It took me three times applying to be successful. The grant meant I had the resources to collaborate with some truly fabulous artists, such as Dominic Berry (who is doing two brilliant shows in Edinburgh this year), Kristen Luckins (who is the Apples & Snakes North Producer), Charles Leek (who did my very cool photos, video and promo artwork) and Kate Morton (whose keen theatre design eye helped me create a minimalist set that I can cart around in a flight case on wheels). I also worked with a composer for the first time. Eleonora Rosca created and recorded the cello and piano music that plays during the show. Her composing came from improvising alongside my poetry, which was a really cool creative experience.

THE EMPATHY EXPERIMENT explores whether addictions to mobile devices are having an impact on how we feel and demonstrate empathy. I weave spoken word poetry through this hour-long show. The premise is that I’ve given up all my devices for 24 hours to see if I can measure increases in my empathy, and the show is the ‘final hour’ of the experiment where I frantically try to prove to the audience that my theory has worked.

I developed the show earlier this year, with R&D support at Harrogate Theatre, the Lawrence Batley Theatre (LBT), Square Chapel Arts Centre, and the Brewery Arts Centre. I had a sold-out premiere at the LBT in March and have performed it in Kendal, Harrogate and the Cotswolds. Feedback has been incredibly positive. The subject matter resonates strongly with people, and has sparked some animated and urgent discussion about how we use our phones and how we connect with each other. I’ll be performing the show at the Greater Manchester Fringe in July, before heading up to Scotland.

A new experience in this process was having live captioning at one of my performances. I connected with a woman called Margaret Hansard who provided captions for the show at Harrogate Theatre. I was featured in Limping Chicken (the world’s most popular deaf blog) about the reasons behind my decision to do this. As a result of the blog, I was contacted by Claire Hill and will have a captioned performance of THE EMPATHY EXPERIENT in Edinburgh on Tuesday 13 August. Claire is a seasoned captioner, and this will be her first time captioning a PBH Free Fringe show … we are so excited to make it happen!

Dominic Berry (who helped develop my show) is performing When Trolls Try to Eat Your Goldfish (fab kids show), as well as his wonderfully energetic show, I Can Make You Fail Slightly Less. Bróccán Tyzack-Carlin’s show Don’t Bother is superb (it won Best Spoken Word Show at the 2019 Saboteur Awards). I’ve been following Leanne Moden’s development of Skip Skip Skip on Instagram and am really excited to see it. Ros Ballinger’s Better Than Dying Alone was aces at last year’s Camden Fringe. Poet Henry Raby’s Apps & Austerity promises to be powerful, and Sez Thomasin’s Equality and Perversity will pull no poetic punches. Also excited for Mark Grist’s Mark Can’t Rap and Pete the Temp’s Homer to Hip Hop … SO MUCH TO SEE!!!

Plus, I’ve been invited to be a guest performer at some fabulous shows: That’s What She Said, Loud Poets: Best of Fringe, and She Grrrowls. All three shows feature different (and amazing!) artists each night, so are definitely worth checking out!