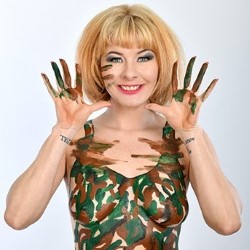 “It’s a story of resilience. How I took my power back and rebuilt my life, after ending up in a mental hospital five years ago.”

WHAT: “The only thing crazier than Sammie was the welfare state supposed to be helping her! Getting your needs met in austerity Britain is a game of Russian roulette. Will she beat the system? ‘Excellent storytelling, very funny’ **** (One4Review.co.uk). ‘A lot of comedians talk the talk when it comes to demanding social change, but Samantha Pressdee walks the walk’ (Chortle.co.uk). ‘Cheeky jokes intertwined with a startlingly honest account of her struggles’ **** (Issuu.com/BunburyMagazine). ‘A socio-political and cultural butterfly’ **** (MumbleComedy.net). ‘Free-thinking, hard-hitting and anarchic, but delivered with a twinkle in the eye’ (Fringepig.co.uk). As seen on RT.”

No, this will be my sixth time at the fringe as a comedian. 7th in total. I first came with a play in 2013, and after seeing a few comedy shows my inner joker was awakened. I’m addicted to the Edinburgh Fringe Festival. Which is better than being on drugs, but probably more expensive!

Nothing to do with my comedy, but I got to go backstage at The Royal Festival Hall and hang out with my teenage crush Zac, from the band Hanson. It was also quite nice to appear on RT’s Sputnik with George Galloway. It’s the first time I have been invited on television to talk about my comedy.

I want to big up my fellow lunatics so Fern Brady: Power and Chaos. She’s a badass! Alfie Brown: Imagination, he is my comedy guru. Phil Nichol: Too Much, who is my comedy mom and the people who have joined my barmy army by participating in my mental health project Pulling It Together; Laura Lexx: Knee Jerk, Juliette Burton: Defined and Dave Chawner: Mental. Also my friend Mags McHugh in Black Sheep and my indigo sister Clare McCartney in Working-Class Progress with Backenders.