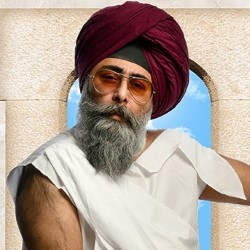 “I premier at the Fringe and then we will tour in the spring of 2020.”

WHAT: “Identity politics. Right-wing nationalism. Climate Change. Brexit. Ronan Keating’s solo career. There isn’t much philosophy going on. Following his Celebrity Big Brother house “vacation”, the host of BBC Radio 4’s Sketchtopia embarks on one man’s mission to find a philosophy that explains and engages the malaise of modernity. Where are the prophets? The visionaries? The rest of Boyzone? Regular on BBC1’s Question Time and This Week. ‘Immensely funny’ (Daily Express). ‘Consistently thought provoking’ **** (VoiceMag.uk). Something quite special… inbetween the laughter are stories of genuine power’ ***** (BroadwayBaby.com).”

This will be my eleventh year at the Fringe. I never imagined I’d do one show let alone find myself entering my second decade. It’s the highlight of my year.

Well, there was that TV show called Celebrity Big Brother….

My show is produced by Broken Robot and So Comedy. I write it. I have the most amazing team working with me. Miranda, who used to tech my show now looks after me day to day. The Big Bow Wow aka Benjy is my tech but also a crucial member of the on-stage experience. I premier at the Fringe and then we will tour in the spring of 2020.

I am incredibly biased (and proud and excited) about my wee Brother’s Fringe debut with his stage version of the much-loved Radio 4 sitcom, “Fags Bags and Mags”. It’s such a great idea and I’ve been badgering him for years to play Edinburgh. Of course, the Fringe gods have scheduled us against each other!