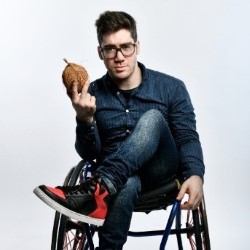 “I still have not worked out why everything in Edinburgh is uphill! It’s like an Escher painting.”

WHAT: “Join the BBC New Comedy Award finalist and wheelchair enthusiast as he tells you about how his first paid gig led to him performing on BBC2 a year later, and what happens when you are being trolled online for not being disabled enough. Aaron is far better at stand-up than standing up and his unique perspective on life – usually of people’s belly buttons – gives him a distinctive edge in his performances as well as a sore neck. Jewish Comedian of the Year 2017. ‘A class act’ (Chortle.co.uk).”

This is my first full hour show, but I have been to Edinburgh for the last 4 years. So I know my way around but I still have not worked out why everything in Edinburgh is uphill! It’s like an Escher painting.

When I filled up my car with petrol, I put exactly £50 of petrol in and went into the kiosk and paid with a £50 note. I have never felt cooler.

My show this year is about the time where I got trolled online for not being disabled enough. It was a very weird experience, but as soon as it happened I knew that I was going to write my show about it.

After the Fringe, I’ll be doing a mini-tour of the UK and hopefully, I will be going to some of the Australian festivals next year.

These are the guys that I’ve seen in previews and are awesome:

But also take a punt on anything that grabs you. It could be amazing and they could be the next big thing and you’ll be very smug that you saw them first, or they’ll be rubbish and it’ll make a great story!