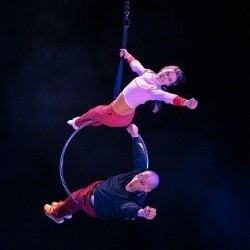 “Heroes is a delve into the world of superheroes, celebrity culture and the everyday heroes around us.”

WHAT: “This playful new aerial show from All or Nothing and Room 2 Manoeuvre delves into the world of superheroes and beyond! In their quirky circus universe, two performers (and their miniature sidekicks) explore what it means to be a hero. The dynamic duo tackle the darker side of life in the spotlight and the pressures of being a role model with a never-ending list of enemies. Are we blinded by celebrity? Or are the ordinary people living extraordinary lives our true heroes? Families assemble – don’t miss this clever caper told through aerial dance theatre and contemporary circus.”

We are based here so have been around the festivals for many years. And have been involved in all kinds of ways not just with All or Nothing but many other companies and events. This is the first time since 2011 that we have presented work, so its exciting to be doing this in our home town.

The last year has been busy! We’ve toured Heroes across Scotland, flew through the trees all December at Archerfield for their Christmas Fairy Trail, performed on Princes Street for Edinburgh’s Hogmanay and created an aerial spectacle for Paisley’s Halloween Festival involving flying witches on a 60tonne crane and 50 young people.
We’ve just finished an amazing project with National Theatre Scotland and performance maker Nic Green called Like Flying. Working with young people from 2 high schools, they learned aerial and theatre skills and created a promenade aerial theatre performance in their schools.

Heroes is a delve into the world of superheroes, celebrity culture and the everyday heroes around us. It follows the journey of two characters as they explore what it means to be a hero. There is some talking and text, but much of the story is told through aerial – hoop and harness, dance, cyr wheel and partnering work. There’s lots of laughter, miniature sidekicks and a fantastic dynamic between the performers, and does have something for all ages, including some classic Hero tunes.

The show has been co-created and directed by myself and Tony Mills of Room 2 Manoeuvre, another Edinburgh based company. Part of wanting to create a show about Heroes was that we started talking about the fact that we all have people we look up to, and with the rise of the selfie and Instagram culture and the quick fame with a quick fall, what qualities did people aspire to. Or what did we think a hero was. What were the pros and cons of being in the spotlight? And who were our heroes?

The show is performed by Tony and dancer/aerialist Beverley Grant. We developed the show along with Bev, workshopping ideas, devising and creating. Last year we had a residency in Ireland at the Irish Aerial Creation Centre which allowed us to create the majority of the show. This was then performed as a work in progress at Braw Circus Festival in Glasgow in September 2018. Since then All or Nothing were successful in gaining funding from Creative Scotland to develop the show further and toured it to 17 venues around Scotland in Spring 2019.

After this we’ve got a few dates lined up for Scotland/ England in 2020 but looking to take it further afield and keep growing.

As well as taking recommendations from others, you cant have really done the fringe properly without just going and picking something random. It could be amazing or it could be something that you would never go back to. Here’s a wee selection of some shows to try and catch:

CoisCeim at Dance Base – another fab Irish company

Curious Seed at Dance Base -Christine Devaney is a beautiful dancer

Venues such as Summerhall and the Underbelly Circus Hub

And at the EIF, lots of amazing talks and artists such as Neneh Cherry, Cas Public / Helene Blackburn, Shooglenifty, Trisha Brown Dance Company