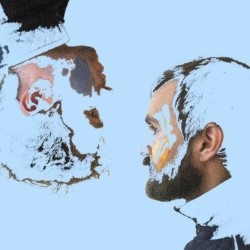 “I’m feeling both prepared and completely in over my head.”

WHAT: “Static is a hybrid theater and live concert production that tells the story of a son using music as a means to cope with losing his father to dementia. Static is a multifaceted production that utilizes projections, live music, and a simplistic approach to story telling that delivers an emotional, moving performance that is sure to leave you heartened and shaken.”

Yes and no! It’s my, Daniel’s, first time in Edinburgh. But my partner in STATIC, Conor Kelly O’Brien, has been the past several years and produced a couple plays at the Fringe. So I’m feeling both prepared and completely in over my head.

It’s actually been a very busy year… We debuted STATIC at the Scranton Fringe in September of last year and did a small run at a theater in the Pocono’s in November ’18. I’m mainly a musician and I tour full time with my band LIGHT SOUND, so in March I did a US West Coast tour and then went to do STATIC at Orlando Fringe in May. We’re also doing Off Broadway at 59E59 Theaters for their East to Edinburgh Festival right now. That ends the day before we fly out to Edinburgh.

I also announced the release of my debut metaphysical / sci-fi novel, Human World, via Boyle and Dalton. That’s unrelated to the play but still something I’m really excited about!

The show started out in a really unique way. I’m mainly a musician and my partner in the show, Conor Kelly O’Brien, is a playwright / actor/ arts administrator. He and I met when he booked my band at a venue he owned in Scranton, PA when I was touring through back in 2014. We stayed friends and when I released my latest album, I sent it to Conor and he was so moved by it he wrote the story of STATIC to weave between the songs on the album. When someone writes a play to your music you don’t say no. So we started working on at a distance (me from New Orleans and him from Manhattan), and came together to rehearse as we’ve been able to and it evolved from there.

After this Edinburgh run we’re planning on bringing it to Adelaide Fringe and then to Tokyo for a short run. We’ll rest somewhere in there.