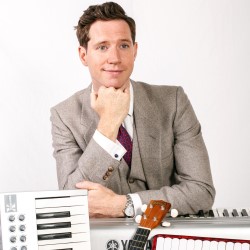 ” If we thought about the world as freely and creatively as children, we’d already be living on Mars by now.”

It’ll be my first fringe as a solo musical comedian, but this will be my 7th fringe as a performer. I’ve been up many times with DugOut Theatre. We did musical comedies for theatres like Inheritance Blues, Stack, Swansong and other less successful shows.

Fringe lowlights include performing in a 3 person sketch show to 3 people, one of whom left to answer the phone halfway through, so we paused the sketch until she came back. Highlights include almost breaking even in 2013.

The biggest thing that’s happened to me since I was last at the fringe is working with children. My new show is about teaching young children music and how it’s been very fulfilling and very, very funny. If we thought about the world as freely and creatively as children, we’d already be living on Mars by now. I’ve also got into squash. It’s a fast game, squash.

Humoresque is a madcap multi-instrumental musical comedy solo show, starring me, Ed MacArthur. I’ve been writing the show for a few months, composing songs and playing them to George Chilcott, my director and founder of DugOut Theatre. We’re best mates and have been coming up here since 2010, so we’re gluttons for punishment. The show will be debuting in Edinburgh and then touring afterwards, performing 7 shows in 7 days in 7 different continents!

I’ve actually made that up, but if the offer was on the cards I would happily do it, especially Antarctica. They say a venue should be ‘cold for comedy’.

Jack Barry is a wonderful stand up comedian. I could watch him forever. Annie McGrath’s stand up will have people crying with laughter. GoodBear is a fantastic sketch group and I think this year will be their best show yet. They’re absolutely hilarious performers. Difficult to work with, but great guys.