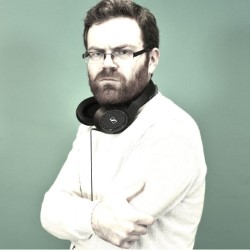 “I was away on my honeymoon in Indonesia. It was all pretty glorious until a massive, devastating earthquake hit about 20 miles away from the island we were on at the time and we then had to evacuate, along with the thousands of other tourists and locals, as it had become unsafe to stay.”

WHAT: “In 2018, Nick ‘Horse’ Horseman got married, survived a 6.9 magnitude earthquake that killed 450 people and gave up his day job to become the biggest rap superstar of all time. This is his story, told through original beats, rhymes, several jokes and sick hip-hop music vids. Horse was previously half of musical double act Horse & Louis, Musical Comedy Awards runners-up in 2010 with appearances on BBC Radio 2 and 4. This is his first solo Fringe. Press for Horse & Louis: ‘An excellent hour of comedy’ **** (Comedy.co.uk). ‘Very funny’ **** (ThreeWeeks).”

WHERE: Just the Tonic at The Mash House – Just the Attic (Venue 288)

This is my first time here as a solo performer. I used to be part of a double-act (exactly half, in fact) called ‘Horse & Louis’ and we did a few runs here between 2010-2014. Our final show here was a comedy bingo show which attracted an eclectic mix of comedy enthusiasts and die-hard bingo fans. The latter group were decidedly unimpressed at our meddling with their beloved game and gave us quite a hard time but a very valuable lesson: never miss with the bingo-heads. Frightening.

Whilst Edfringe 2018 was happening, I was away on my honeymoon in Indonesia. It was all pretty glorious until a massive, devastating earthquake hit about 20 miles away from the island we were on at the time and we then had to evacuate, along with the thousands of other tourists and locals, as it had become unsafe to stay.

I remember sending some pictures of the chaos to a friend who was up at the Fringe at the time and she messaged back: “that’s not fair sending that, you know we don’t have any sunshine up here”. She hadn’t clocked the collapsed buildings and general destruction, just the relentless Indonesian sunshine! She felt pretty bad about it afterwards.

My show is about surviving the earthquake and how it changed my life. I basically decided that life was too short and precarious and that I needed to quit my job immediately and pursue my true calling: hip-hop superstardom. It might be an unlikely career choice for a 37-year-old database administrator but I think I’ve got what it takes to make it. This show is the first step on my journey to the top.

I first performed the show at the Leicester Comedy Festival in February and have since taken it to Machynlleth Comedy Festival, Brighton Fringe and Hastings Comedy Fringe. The final pre-Edinburgh stop was in Buxton, where I was honoured to be nominated in the Buxton Fringe Comedy Awards.

If you want to see more comedy hip-hop, go check out Joe Jacobs’ show ‘Grimefulness’, which I’m thoroughly looking forward to. Other musical comics to watch out for this year would be Huge Davies with his show ‘The Car Park’ and Katie Pritchard with ‘Storm Stud’. Joe, Katie and Huge were my personal favourite acts in this year’s Musical Comedy Awards, which I’m lucky enough to host on the regular.

Other shows that I’ve seen in preview and really enjoyed were Joey Page’s ‘Afterlife’ and Nathan Cassidy’s ‘Observational’. Both definitely worth checking out.