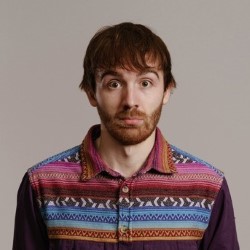 As far as conversation starters go, Chernobyl isn’t exactly a trip down gumdrop lane. Don’t get me wrong, there’s a lot to talk about, but generally speaking you’re not gonna squeeze a lot of laughs out of decay rates and radiation sickness. There are, of course, exceptions which prove rules like that – and Ian Smith is one of them.

As with any stand-up, we start with what the audience first sees: the persona. Smith’s stage manner is at once very familiar, yet just odd and unexpected enough to differentiate him from the droves of high-energy, earnest™ comedians who crowd the clubs each Fringe. There is a real genuineness to Smith’s performance -whilst completely unafraid to throw himself into whatever the set demands, there is nevertheless a vulnerability to his delivery. A subtle-but-not-unwelcome shakiness as he dismounts a punchline, as if he can’t believe he’s doing stand up. It goes a long way to closing the gap between performer and audience, though in Underbelly’s “intimate” Buttercup venue, this gap is certainly more metaphorical than physical.

The set itself? Comedy uranium. If you thought the effects of radiation were unpredictable, Smith has something coming for you: it’s functionally impossible to tell exactly what the slant of the next joke will be, or where a setup is going to lead. You can try and guess what’s coming before wit hits the lips – but prepare thoroughly for disappointment.

It’s clear from the outset that Smith thrives in the limelight, his best material comes when the pressure’s off: skated in at the end of another joke, or a quick aside away from the mic. There’s an insistent wit bubbling under the lid of Half-Life, and adds an almost mischievous edge to a set whose main quality is sheer affability. It’s a quixotic, apolitical journey through the trials and tribulations of a man who, ultimately, just wants to get through to the other end with all his limbs attached. In a post-Carlin, post-Brexit comedy landscape, that’s rarer than might be hoped.

Watching Ian Smith onstage is like watching a man being interrupted by himself, and it’s where he’s strongest. When he’s pulling suddenly off the expected course, the exits are exhilarating. However, that also plays in the other direction: when a joke outstays its welcome, the performance really feels the drag. Smith sometimes seems hesitant to take his laughs and run, and that focus on bleeding every possible laugh has a palpable effect on his flow. Though consistently high energy, Half-Life wasn’t consistently high confidence, and that’s a genuine shame: his material is punchy and delightful, and far more endearing than even Smith himself seems to believe.

Even the use of powerpoint, an oft-loathed enemy of mine, was integrated with consistent quirk and surprising seamlessness. The reality created by Half-Life – full of pigeons doing weird things and OAP scrabble tournaments – is strongly cohesive and only extended by Smith’s clever use of tech. In all, it creates the sense of a complete show: the quintessential Fringe experience of disappearing into some alternate world for an hour, and emerging Alice-esque after what seems moments. Nothing which is not purposefully highlighted becomes visible, and it’s that kind of production sleight-of-hand which marks a certain amount of care behind the scenes.

The bottom line? Ian Smith is an archetypical Fringe performer with an atypical wit, and well worth your time. It might be named after a meltdown, but Half-Life glows.