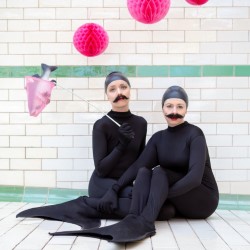 “A successful hour of charming jokes and energetic tricks.”

Lucille and Cecilia is a show about two sea lions whose names have the word ‘seal’ in them. Though of course this joke might make an ounce more sense if they were actually seals, the charming simplicity of the gag is still a tickler. So, thankfully, is the rest of this thoroughly amusing and enjoyably bonkers hour of high-energy clowning by Chloe Darke and Susanna Scott of Bang Average Theatre.

The show takes a playfully scattershot approach to exploring Lucille and Cecilia’s lives and personalities. They perform circus tricks, describe their deep love of fish, and debate what could possibly lie beyond their watery home. Director Steve Brownlie does well to keep the action tightly blocked and includes a well-measured array of props and alternate costumes for the sea lions to bat around for the audience and wield at each other, while Darke and Scott are both charming and affective leading mammals. The only element of the show that resembles a narrative revolves around the two sea lions’ interactions with ‘Trevor the trainer,’ the amusingly-depicted custodian in charge of cleaning and preening the animals. One hates his touch, the other finds it sensuous and exciting, making for some very funny extended sequences where the two show Trevor how they feel, set to a perfectly-chosen rendition of “Ave Maria.” (Both this choice and the use of Air’s “Sexy Boy” show that Bang Average have splendid taste for musical accompaniment.) This and other chapters in the show are performed with pleasant verve and creativity, and both Darke and Scott prove wholeheartedly that they are more than capable clown performers.

The potential drawbacks to their hour come mainly during the somewhat overlong bouts of character comedy that mainly strike repetitive notes, and do not quite match the showmanship or cleverness of their physical gags. Most of these physical feats are not only very amusing but rather impressive, and leave one wishing Darke and Scott had included a few more of these sharply executed sequences and toned down the Laurel and Hardy slapstick a tad, as these performers could certainly show off their talent for choreography quite a lot more. Thankfully, however, enough of the comedy strikes the right tone to make Lucille and Cecilia a successful hour of charming jokes and energetic tricks that leans right into the refreshingly pure entertainment of watching two human beings put their all into acting like sea lions.

For a uniquely weird, pleasantly escapist escapade, take the splash and see this show.