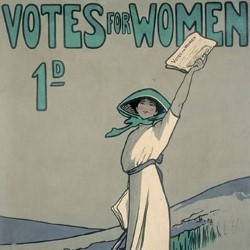 “I finally qualified for a free bus pass.”

WHAT: “The story of Emmeline and Richard Pankhurst and the suffragette movement. This couple were the architects of two of the greatest steps forward in the fight for women’s rights in Britain. In Votes for Women!, Polymorph Theatre examine what brought these two remarkable people together and the effect they would have on the cause of women’s rights. Richard Pankhurst was the champion of women’s property rights, while Emmeline Pankhurst drove the fight for women’s suffrage to new heights and new notoriety. Tragically separated by Richard’s untimely death, the campaign continued. Votes For Women!”

Very much not our first time! As a performer, I first came here about 30 years ago, but Polymorph Theatre started 4 years ago and we have returned again and again to our venue, Space Triplex.

We sold out a two week run of 10 Rillington Place in 2017, a one-person show, and last year sold out a week with a two-hander, Dulce et Decorum Est: The Unknown Soldiers.

This year we are back with another two-hander in Votes for Women.

Edinburgh Fringe is my guaranteed stage outing for the year, most of my regular work being for screen.

Probably the biggest name thing I’ve been in professionally is Black Mirror, the Netflix TV series which I was in last year.

Personally, the most significant thing is that last year I finally qualified for a free bus pass.

The show is called Votes for Women. I wrote and produced it.

Polymorph Theatre is the name I’ve used for the production of all my own work for many years, but four years ago it effectively became a creative partnership between myself and Penny Gkritzapi, who designs and directs the shows. We met doing our respective postgraduate degrees (me in Acting, Penny in Directing) at the University of East London.

We’re joined this year by another former classmate, Emilie Maybank, who is playing Emmeline Pankhurst in the show, and who this year has the responsibility of the lead character.

The show was written specifically for Edinburgh, so it’s brand new and premiering at the Fringe.

I am a big fan of two things – improv and magic. So I’m going to recommend “Whose Line is it Anyway?” which I’m sure everyone will have heard of. I’m also going to recommend Colin Cloud, a mentalist (mind reader) who is stunningly entertaining.