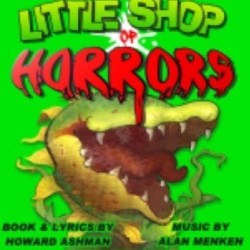 “A faithful, fun adaptation of a well loved classic.”

I’ve always had a weakness for Little Shop. Call me puerile, but there’s a lot of musicals that’d benefit from a giant, bloodthirsty jazz plant. Fiddler on the Roof is an amazing show, but imagine Sunrise, Sunset with Levi Stubbs scatting in the background. It was with glee, then, that I saw a production was to be brought my doorstep.

For those who don’t know, the premise of Little Shop of Horrors is classic black comedy: a nerdy schmuck finds an alien plant that changes his life for the better – the only catch being that Audrey II demands human blood in exchange for continued success. Think Faust, if Faust was a rock opera set mostly in a flower shop.

Bob Hope Theatre stays true to this narrative whilst squeezing the original work into a tight hour – and, in that respect, it’s a real success. As someone who is shamefully familiar with its predecessors, places where material was cut and fused for time was surprisingly seamless, incorporating the dramatic flow into the changes with masterful attention to inter-scene connection. Though a few scenes (especially those reliant on emotional revelations) felt a little pressed for space, it’s a necessary evil of the Fringe business.

Performances are strong across the board, with every player slipping into Little Shop’s caricature cut-out roles with aplomb. Whilst not doing anything particularly new with the roles, there was no place where the demands of the characters were not met. Richard Cooper is wonderfully nebbish as Seymour, in stark contrast to Sarah Leanne-Howe’s Audrey – straight out of the pages of a 1950s Good Housekeeping. Kris Webb’s murderous Audrey II, whilst lacking the booming presence of his predecessors, brought a pointedly creepy smoothness to his role. Managing to look vaguely threatening in a big frond costume is tough, but honest to God it happens.

MVP of the production must go to Andy Moore, with his standout performance as Orin Scrivello. Energetic, gleefully sadistic and uncomfortably charismatic, Moore keenly captures not only the essential energy of the play, but also the essence of what makes his character such a joy to watch. Praise for energy also goes to Paul Stone as Mushnik. Though his accent takes certain peaks and troughs during the performance, he immediately lights up the stage with each appearance.

However, Little Shop demands more than theatrical chops. Rock Opera is a hard beast to wrangle, especially on the small stage. And don’t think for a moment that the singing performances in this show are not incredibly worthy – they are, especially in the case of Chiffon, Crystal & Ronette. However, technical mastery is just one facet of this kind of performance, and unfortunately, the necessary punch and energy required to really hammer home the intensity and spectacle of a rock opera simply wasn’t there. The songs had heart, but (apart from a select few) nothing every really comes in for the killing blow. Tension doesn’t range high enough, sorrow cannot go low enough. This is a cast with the potential to hit the audience like a sledgehammer, and it’s disappointing to see it miss.

It’s deceptively hard to pull off an established show, especially with a smaller budget and Fringetastic time constraints. The performance by Bob Hope Theatre, whilst not bombastic, is nevertheless a faithful, fun adaptation of a well loved classic.