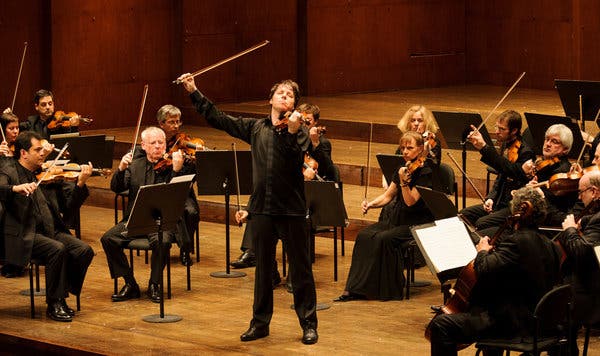 “Oh glorious 1713 Huberman Stradivarius in the hands of Joshua Bell”

The Usher Hall have done a great feat of marketing with their Sunday Classics International Concert Series.  It utilises concert downtime, offers below premium rates to hirers and audiences alike, and thereby enables second tier orchestras from around the world to perform in a city with the musical cachet of Edinburgh.  And by second rank I am not being pejorative.  How often do you get to hear the Iceland Symphony Orchestra, Swedish Philharmonia, or St Petersburg Symphony (not Philharmonic)?

Moreover, the repertoire offered is accessible, and as a consequence of all of the above the Hall is usually sold out except for the Gods, mostly by the elderly not especially musically literate or regular concert goers, and, by the sound of things, after a good lunch.  The queues from the Box Office tailed back into the cold January air. There was a real buzz.

On the question of sound of the non-musical variety I again criticise the audience for their indiscriminate coughing.  January and February concerts are of course the worst for this, and I have again asked the Usher Hall to put a note in the programme such as do the Royal Festival Hall advising patrons to cover their mouth with a hankie when coughing is inevitable as it reduces the sound by 90%.  Compared with the discipline of the audience last night in Berlin who remained silent throughout and for 20 seconds after the conclusion of the BPO’s Bruckner 4, this lot were an ill-behaved bunch that would have got chucked out of any self-respecting German or Austrian concert hall.

In the context of the above, to have perform on a Sunday afternoon the Academy of Saint Martin’s in the Fields, undoubtedly one of the finest chamber orchestras in the world with probably the longest pedigree, alongside top soloist and their Music Director for over eight years, Joshua Bell, the mould was truly broken and I felt we were in for a real treat.

Only so-so.  The playing throughout was technically perfect, but the works were not over demanding.  The tempi were fast, not uncommonly so, but particularly in the two Bach pieces there was no time for the emotion to come through. You have to work to get the emotion in Bach, but it is surely there.  Both the Violin Concerto in A Minor and Brandenburg Concerto No 3 showed a pleasing brilliance of tone – oh glorious 1713 Huberman Stradivarius in the hands of Joshua Bell, what a privilege to hear its singing, pure, transcendent tone – but both were textbook readings of these pleasant pieces you could have found on a budget price label.

It was the glorious Mahler arrangement of Schubert’s Death and the Maiden Quartet No 14 in D minor that made the case for the band.  Whether Schubert or Bach is spiritually deeper would keep musicologists arguing for days, but the combination of Schubert and Mahler was formidable.  From the opening bars it was immediately obvious that we had gone up several notches in terms of interpretation, even allowing for, once again, the tempo being slightly on the fast side.

Why Astor Piazzolla’s (1921-1992) Four Seasons of Buenos Aries was chosen as the final and part of the programme beats me, other than for its superficial entertainment value.  A selection of tango inspired pieces with some virtuoso violin playing but in the the-dansant style delighted the audience, but classical music it was not, nor meant to be.

The overall impression of the afternoon was of a top-class band entertaining us, but without unduly stretching our critical faculties.  As such it was hugely popular with the audience.