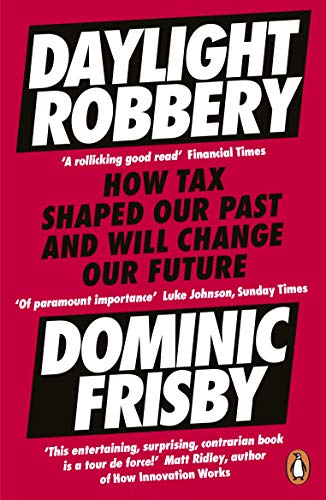 “I’m not sure that there were bananas in Ancient Babylon but there was a cryptocurrency based on bananas a few years back. Not sure if it still exists. It might have gone pear-shaped.”

WHAT: “Death and taxes are our inevitable fate. We’ve been told this since the beginning of civilisation. But what if we stopped to question our antiquated system? Is it fair? And is it capable of serving the needs of our rapidly-changing, modern society?

In Daylight Robbery, Dominic Frisby traces the origins of taxation, from its roots in the ancient world, through to today. He explores the role of tax in the formation of our global religions, the part tax played in wars and revolutions throughout the ages, why, at one stage, we paid tax for daylight or for growing a beard. Ranging from the despotic to the absurd, the tax laws of the past reveal so much about how we got to where we are today and what we can do to build a system fit for the future.”

WHO: “Dominic Frisby is perhaps the world’s only financial writer and comedian. He writes a weekly investment column for Moneyweek about gold and finance and has also written for publications including the Guardian and the Independent. He speaks at conferences around the world on the future of finance. Frisby hosts various podcasts, performs stand-up comedy and is a recognized voiceover artist.”

Like many everyday expressions – Nosy Parker being another – the expression is thought to have its roots in a tax, in this case the Window Tax. Window Tax was introduced in 1695 to help fund William of Orange’s conflicts abroad. It lasted over 150 years. Like all taxes, it had many unintended consequences, the worst of which was that it made people ill. The urban poor of the Industrial Revolution suffered most. They lived in large tenement buildings, which, having many windows, proved heavily susceptible to the tax. Landlords – on whom the tax fell – simply boarded up the tenement windows to reduce costs. The numerous epidemics of disease in cities during the Industrial Revolution – typhus, smallpox and cholera, in particular – were made worse by the cramped, damp, windowless dwellings.

By the nineteenth century, opposition to it was everywhere. Charles Dickens fumed that, ‘Neither air nor light have been free since the imposition of the window-tax.’ Campaigning against it went on for decades. Pamphlets were handed out, songs were sung, speeches were made. Only in 1850 was a motion finally put before Parliament to repeal it, and legend has it that, as the matter was debated, MPs cried ‘Daylight robbery!’ The idiom has lived on as an expression for outrageous charging

You catalog the ways in which armed conflict drives innovation, consolidation, and overreach in the realm of tax as the competing governments scramble to spend on their militaries. Is it intellectually consistent to be anti-war and pro-tax?

The short answer is yes. Every single war in history has been funded by a tax of some kind – either during or after the event. Rulers, whether emperor, king, or government, start wars and taxes pay for them. The most effective means to limit war is to limit taxation.

There are plenty of idealistic, pro-large state, high taxation progressives who are anti-war in principle. But in practice, if a government decides it wants to go to war, in a democracy, there’s not a lot the people can do about it. Iraq is a recent example. The country did not want that war. Tony Blair did. Taxation made it possible. Limit taxation, you limit the size of government – and you limit its ability to do harm.

The Emperor Vespasian famously stifled and suppressed the labour-saving devices presented to him by an inventor, perhaps delaying the Industrial Revolution for centuries. You’re standing behind Caesar when the inventor has finished his pitch. The Flavian eyes turn questioningly to you, his visitor from the distant future. Knowing what you know, what do you advise the supreme ruler of the known world about the costs and benefits that big technological disruption and innovation bring? What do you advise Vespasian to do?

I would have advised him to stand aside and let the innovators do their thing. I’m not sure he would have listened, however. Rulers don’t always want their people getting rich, however – it makes them less easy to rule.

Vespasian, by the way, gave Rome a urine tax. Urine was used for tanning, laundering, and brushing your teeth (!). Collecting it proved so lucrative that Vespasian enacted a tax. Portuguese urine for some reason was the most prized. When criticized Vespasian held up a gold coin and said “the gold is clean.” That’s where we get this idea of clean and dirty money from, so the story goes)

Are there any good taxes, or at least is there such a thing as a least bad tax?

Much as we anarchists may dream of a society with no taxes, the reality is that there has never been a civilisation without taxation. The lower and simpler they are, the better, in my view. The evidence of history is that the civilisations with the lowest taxes (and thus the greatest levels of freedom) are the most innovative, inventive and prosperous.

Milton Friedman described Land Value Tax as “the least bad tax” and I would agree. It’s transparent, simple, clear, easy to administer, hard to avoid or evade, but also hard for a government to overtax. It’s the most natural way to keep the relationship between government and citizen in balance.

Why do crypto-currencies matter to the taxman?

Money beyond the control of government means an economy that is hard to tax and regulate.

Furthermore, government can’t levy the inflation tax. That is it can’t debase the currency. How do you Quantitatively ease bitcoin?

Blockchain currencies are best adapted for transactions involving non-physical, non-tangible products and services. Are there any examples of the kind of real-world tangible commodities – goods that would have been familiar to the Babylonian inventors of currency – that are being successfully traded in cryptocurrency?

I’m not sure that there were bananas in Ancient Babylon but there was a cryptocurrency based on bananas a few years back. Not sure if it still exists. It might have gone pear-shaped.

If you had to put a Dollar, Euro, or Pound Sterling on the first big currency* to switch to blockchain technology, which would it be (and which SHOULD it be)? *one that you don’t have to scroll too far to find on XE.com

Probably one of the Scandinavian currencies. I wouldn’t rule sterling out. We will all soon have wallets with the central bank.

There are examples of small states being big successes (the book spends a lot of time examining post war Hong Kong). Could Scotland, with its fondness for big government, be one of them?

Which of your projections and predictions are accelerating or decelerating as a result of the COVID crisis?

Remote working has become totally normal. I’m amazed at the speed this has happened.

I am working a musical based on my Dad’s book ‘Kisses On A Postcard‘ about his time as an evacuee in WWII.