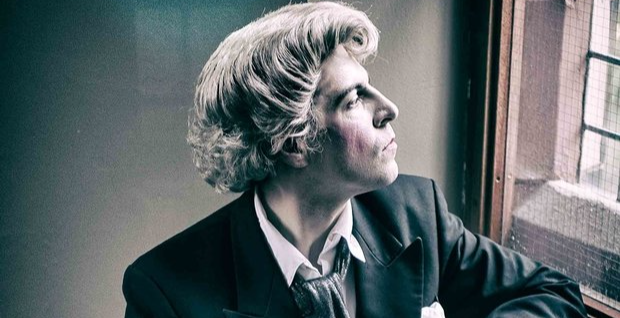 “The student drama scene hugely influenced my choice of career. I made lifelong friends. And sank enough ale to flood Parker’s Piece.”

WHAT: “Fresh from its Off-Broadway debut and milestone 100th performance, Mark Farrelly’s hugely acclaimed solo comes to the Town and Gown Theatre.

From a conventional upbringing to global notoriety via The Naked Civil Servant, Quentin Crisp was one of the most memorable figures of the twentieth century. Openly gay as early as the 1930s, Quentin spent decades being beaten up on London’s streets for his refusal to be anything less than himself. His courage, and the philosophy that evolved from those experiences, inspire to the present day.

Naked Hope depicts Quentin at two phases of his extraordinary life: alone in his Chelsea flat in the 1960s, certain that life has passed him by, and thirty years later, giving a performance of his one man show An Evening with Quentin Crisp in New York. Packed with witty gems on everything from cleaning (“Don’t bother – after the first four years the dirt won’t get any worse”) to marriage (“Is there life after marriage? The answer is no”), Naked Hope is a glorious, uplifting celebration of the urgent necessity to be your true self.

What does Cambridge mean to you?

I studied English Literature at Jesus College in the late nineties. I’ve always found Cambridge magical. It took me three attempts to get accepted. So once I arrived, I was on a mission to make the most of it. The student drama scene hugely influenced my choice of career. I made lifelong friends. And sank enough ale to flood Parker’s Piece. I was so happy there that when I returned to Civvy Street in 2001, I found it very hard to cope, and spiralled into depression. Ordinary life seemed so aggressively mundane. But I have no regrets about overdosing at the Fountain of Pleasure. It was a heady, life-affirming privilege.

The show, which I wrote, is a salute to the courage of the individual to be themselves. Quentin Crisp wittily and bravely emphasised his flamboyant gayness at a time when it was illegal. That’s an extraordinary thing to look back on from the vantage of 2021. But the show is also a timely nudge in the ribs for anybody who may be slipping into conformity and not letting their sparkly, dangerous genius shine before it’s too late.

The first night at The Town and Gown will be the 125th performance. It delights me how much hunger there is for Quentin’s message of hope, his determination to meet adversity with what he calls “laughter in the dark”.

What kind of art makes you ‘Get Your Coat On’ and go see it?

I have a passion for solo work, because of its immediacy and intensity. Sarah-Louise Young, and her amazing “An Evening Without Kate Bush”, are quite something. She is directing my next solo, about Derek Jarman, which debuts at The Town and Gown in August.

But I can’t lie…I go to the theatre infrequently. I much prefer sitting on my sofa, drinking Puligny-Montrachet and dreaming up ideas for new pieces. Going to the theatre can feel a bit like a busman’s holiday for me…I’m performing so often that I like a break from it whenever possible.

To younger self: you will survive. You will weather the storms of rejection, depression and suicidal impulse, and one day your hot, furious little ego will find its quietus and the true you will arise. Nothing will be wasted, nothing forgotten, and everything will come when the timing is deliciously, inexplicably right.

To older self: you were living, breathing, feeling your dream day after day.